Chow will be elected mayor if she chooses to run: poll 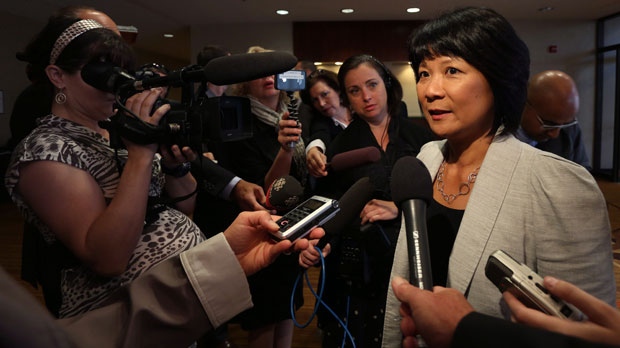 Olivia Chow is shown in this file photo. (The Canadian Press/Paul Daly)

NDP MP Olivia Chow will be the frontrunner in the race to become Toronto’s next mayor provided she puts her name on the ballot, according to a new poll by Forum Research.

The telephone survey asked 1,049 Torontonians for their choice for mayor using a number of hypothetical matchups and Chow won in all five scenarios that she was included in.

In a four-way race with the declared candidates, Chow was the top choice with 39 per cent support compared to 34 per cent for incumbent Rob Ford, 17 per cent for TTC Chair Karen Stintz and 5 per cent for former budget chief David Soknacki.

Chow also beat Ford and Tory by the same margin when Coun. Denzil Minnan-Wong was added to the race.

In the unlikely event that neither Ford nor Tory run, the poll found that Chow would easily beat Karen Stintz.

Ford’s support in that scenario was up four points from a similar poll two weeks ago.

“There are a couple of takeaways here ‐ in the first place, the more crowded the field the more it works to the mayor's advantage. Next, the more Ford Nation thinks about a Chow candidacy, the more firm is their opposition. Third, Rob Ford is closing the gap on all his competitors as the campaign draws closer, and he has a year of free time to work on closing the gap further," Forum Research President Lorne Bozinoff said in a press release.

The poll was conducted last week in the wake of council vote to strip Ford of many of his powers.

It is considered accurate to within 3 per cent, 19 times out of 20.