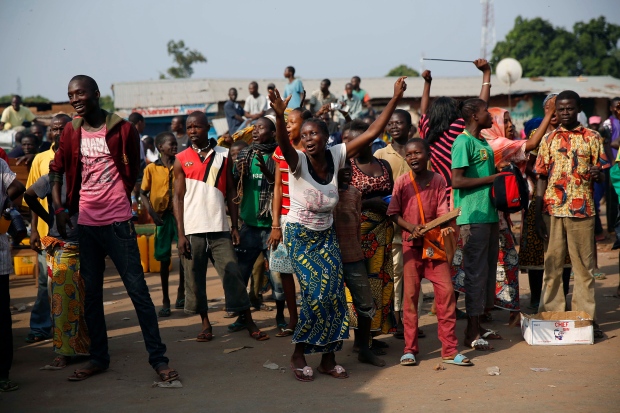 At PK12, the last checkpoint at the exit of the town, the Christian crowd cheers as thousands of Muslim residents from Bangui and Mbaiki flee the Central African Republic town of Bangui in a mass exodus escorted by Chadian troops on Friday, Feb. 7, 2014. (AP Photo/Jerome Delay)

A United Nations commission of inquiry says it has found evidence of ethnic cleansing of Muslims in Central African Republic. But it found no proof that genocide has occurred amid months of unprecedented sectarian violence that has killed thousands of people.

The report released Thursday also says that while death toll reports ranged from 3,000 to 6,000, any such number is a "radical under-estimate" of the people killed in the vicious fighting among Christians and Muslims in the impoverished, landlocked nation.

The three-member commission of inquiry accuses both sides of war crimes and crimes against humanity but accuses the anti-Balaka Christian militia of ethnic cleansing of Muslims.

Thousands of Muslims have fled the country, where a fragile transitional government is trying to hold elections by an August 2015 deadline.