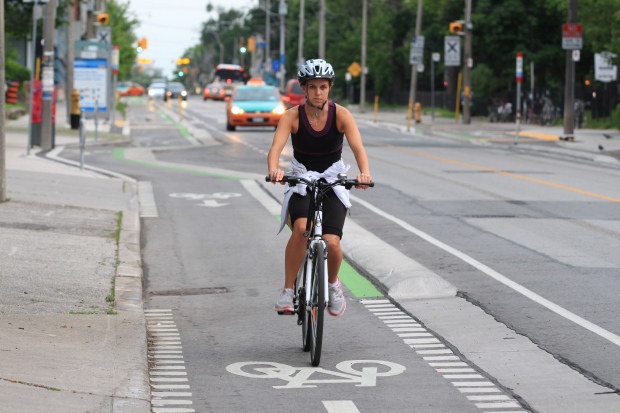 Staff at city hall are being asked to explore ways to license bicycles in Toronto.

The fees collected would be used to maintain or improve bike lanes and learn more about cyclists’ habits.

Coun. Stephen Holyday told CTV Toronto he wants a report on the possibility of creating a system that would require residents to license or register their bicycles.

“I think there’s a lot of opportunity to raise revenue,” Holyday said, but he added that it’s also a great way to collect a “tremendous amount of data.”

He said certain information -- like where cyclists live, work and routes they take -- could help improve infrastructure maintenance and increase “equipment standards and compliance.”

Holyday referenced a 2016 Forum Research poll that found the majority of Toronto voters thought “bicyclists should be licensed.” Of the 882 people in a random sampling, 56 per cent agreed that registering bikes was seen as a “fair trade-off for a comprehensive bike network.”

If a motion passed, Holyday said only the equipment would be registered -- not the cyclist. The report would consider limiting licensing to adults and could look at commuter versus recreational use.

The city has considered licensing before, but a motion to register bikes in Toronto has not yet passed.

@CTVToronto #TalkbackTO NO, we'd need 4,265 bylaw enforcers & our taxes would go up. How do u teach your kid to ride ? get them a license ?

@CTVToronto how about putting laws in the books that are actually enforceable? Like police aren't busy enough! #CashGrab

@CTVToronto #TalkBackTO If you use your bike to commute and ride on city streets then Yes! Same for those EBikes.

@CTVToronto absolutely! The amount of times I've seen bikers do whatever they want is ridiculous! They should be treated as vehicles

@CTVToronto #TalkBackTO YES, Toronto should license bicycles. License and insurance should be required for all vehicles on Toronto roads.

With files from Janice Golding