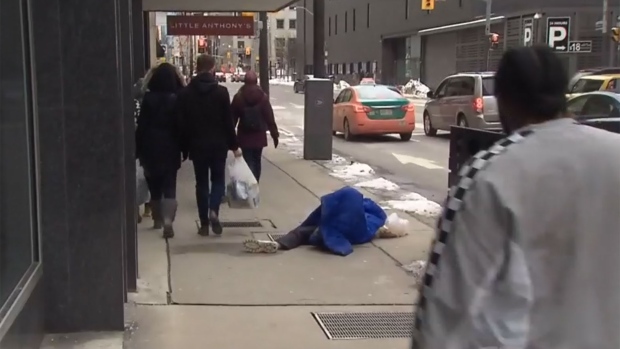 A temporary recovery site for members of Toronto’s homeless community who contract COVID-19 will open today as the city ramps up its efforts to limit the spread of the virus within its shelter system.

Mary-Anne Bédard, who is the city’s general manager of shelter, housing and support, confirmed the opening of the facility during a press conference at city hall on Tuesday afternoon.

She said that the facility, which is located at an undisclosed location, will be used on an interim basis until a permanent site is ready.

It is all part of a wider effort to limit the spread of COVID-19 within the shelter system that Bédard said will carry a price tag “in the tens of millions of dollars” over the next 90 days alone.

There is only one confirmed case of COVID-19 among staff at city-run shelter sites; however it is unclear whether there have been other cases in the dozens of facilities operated by partner non-profit organizations.

“Given that there are over 70 separate shelter locations with varying layouts and ages of building creating adequate physical distancing has been one of our biggest challenges,” Bédard said of the city’s efforts. “Many shelters were able to meet the physical distancing guidelines and those that were not we have focused on reducing their capacity and relocating people to other sites.”

The city has to date transported 175 shelter clients to two temporary isolation sites as they awaited COVID-19 test results.

It has also begun an ambitious program to relocate shelter clients from some facilities in order to improve physical distancing.

So far about 1,000 have been move to secondary sites in hotels and community centres and Bédard said that there are plans to move another 1,000 by April 30.

She said that officials have also secured 250 Toronto Community Housing units and have already moved about 50 shelter clients into those spaces with more expected to be relocated in the coming days and weeks.

More than 300 staff have been reassigned from other city divisions to help with the unprecedented relocation efforts, she noted.

“Although on the surface it looks like a simple matter of moving people from one location to another there are significant steps we need to take to ensure it is done properly and with dignity,” Bédard told reporters.

Bédard said that the initial objective of the city’s response was to keep COVID-19 out of the shelter system “for as long as possible” to allow time for planning but she said that officials always knew that it would “only be a matter of time” before cases would begin to pop up.

Dr. Eileen de Villa, Toronto medical officer of health, said that despite all the precautions that have been taken she remains “deeply concerned” about the devastating impact that COVID-19 could have in a community that tends to have a higher prevalence of pre-existing conditions and poor health outcomes.

“We were prepared for this unfortunate situation of having cases in shelter system and I am relieved to report that there have not been any COVID-19 deaths among clients. Overall, though, I am still very concerned. Individuals who access our local shelter services are some of our most vulnerable residents and they are very vulnerable to severe illness from COVID-19,” she warned.

Bédard said that the city has provided its shelter partners with a $1 million in funding to provide personal protective equipment and has in some cases provided them with some of that equipment from its “limited stock.”

She said that the city has also placed a moratorium on clearing encampments and has shifted its focus to promoting safety in those encampments through “increased cleaning and garbage removal and the provision of hygiene products.”

“We know that we will need to plan beyond these initial 90 days. We remain committed to a plan that is nimble and responsive to the virus and to the needs of this vulnerable community,” she said of the city’s response so far.

Information about the city’s efforts to limit the spread of COVID-19 within the shelter system comes just one day after more than 300 healthcare professionals wrote an open letter to Mayor John Tory demanding that he work to immediately relocate the shelter system’s 7,000 clients to hotel rooms and other safer facilities.

For his part, Tory told CP24 earlier on Tuesday that the city is working as fast as it can to relocate many shelter clients but has to do so carefully and with consideration for their unique circumstances.

“You would always like to do everything faster but we have to be careful and we would be criticized if we moved these people in an insensitive way,” he said.