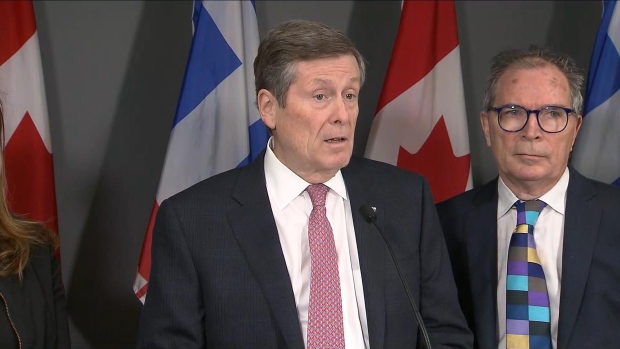 Mayor John Tory speaks with reporters about the HousingTO plan at city hall on Tuesday.

The city has set an ambitious goal of approving 40,000 new affordable rental units over the next decade but the plan hinges on the federal and provincial governments coming to the table with nearly $15 billion in funding.

The HousingTO action plan, which will be considered by the city’s planning and housing committee next week, provides a blueprint for how the city can develop thousands of new affordable and supportive housing units by 2030 through 76 different actions.

Staff say that if implemented fully the plan will set the city “on a new course on housing,” helping an estimated 341,000 households struggling to get by in the process.

The plan, however, relies on an assumed contribution of $14.9 billion from other levels of government to deliver 20,000 of the promised units. The city would contribute $8.5 billion, about two-thirds of which ($5.5 billion) has already been set aside.

“This plan is very much going to be dependent on us putting up our share of cash and land and the other governments doing the same thing and I will be an unrelenting advocate when it comes to the necessity of those governments coming forward,” Mayor John Tory said during a press conference at city hall on Tuesday. “We have to be determined about this and I think the other governments understand the urgency of the problem, both socially and economically, and we just need to make sure that they respond.”

Housing Now initiative would be expanded

The HousingTO plan sets a goal of 40,000 new unit approvals over the next decade, including 18,000 supportive units and a minimum of 10,000 affordable and supportive units dedicated to women and girls.

That number equals out to about 4,000 affordable units approved per year, which is more than double the record 1,650 affordable rental units that were approved in 2018.

To get to the higher number, the plan calls for the expansion of the city’s Housing Now initiative, wherein developers are provided with surplus city land and other incentives, such as tax relief and development charge exemptions, in exchange for ensuring that a portion of the units they deliver are classified as affordable.

The city had planned to invest $716 million in that program over the next decade in order to spur the development of 3,700 new affordable rental units but now it is looking to invest an additional $1.29 billion in order to deliver nearly triple the number of affordable units delivered to 10,000.

The plan also calls for the renewal of a similar program for non-city owned lands – the Open Doors initiative – which it says could bring an additional 10,000 affordable units to market over the next decade.

The plan also calls for the creation of a land bank, where surplus real estate owned by both public and private entities, such as faith organizations and non-profits, could be aside for the future development of affordable housing.

“Make no mistake, what we have announced today was never meant to be the final answer. Pure arithmetic tells you that,” Tory conceded. “There is much more to be done but we need the other governments to step up and do it with us. But we are not waiting around. We are proceeding to have meetings with non-profit operators, churches and others, and we are proceeding to buy land on a judicious basis to make sure that it can be available for affordable housing.”

The HousingTO plan builds on the work of another 10-year-plan that committed the city to approving 1,000 new affordable units each year.

The city, however, only met that goal in two of the last nine years.

Speaking with reporters at city hall, Tory’s housing advocate Ana Bailão's said that the new goal is aggressive but achievable.

“There is no doubt we are being aggressive here, we need to be, but we can achieve this,” she said. “That is what this plan is all about. It is something that can be done and needs to be done.”