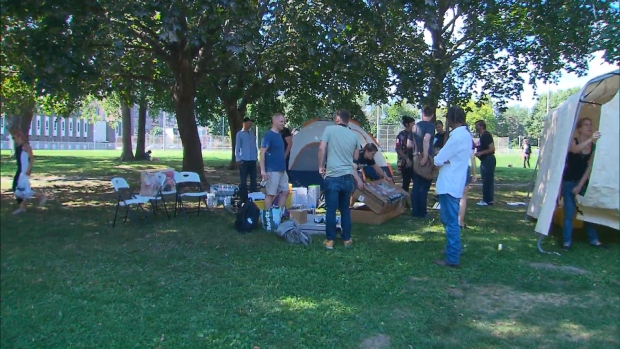 A city-run temporary supervised injection site that is being established ahead of the official opening of three permanent sites will be in operation by early next week, according to Mayor John Tory.

The facility is being set up at a needle exchange at Victoria and Dundas streets, where construction is already underway on a permanent supervised injection site that is expected to be complete by later this year.

Though the city did not initially have any plans to open a temporary facility, it decided to do so after harm reduction workers set up a unsanctioned pop-up site in Moss Park on Saturday.

Though polic have allowed that facility to operate, Tory said on Tuesday that his "expectation" is that it will close once the temporary site is in operation.

“I understand the urgency to address this issue and the motivation of the advocates who opened the unsanctioned pop up overdose prevention site in Moss Park. However, the site, in a public park within a neighbourhood with many existing challenges, and the model, are both unsustainable,” he said in a statement issued by his office. “With the opening of the interim service at The Works, my expectation is that the organizers of the Moss Park site will dismantle the pop up.”

News that the interim supervised injection site will open as early as next week comes amid an alarming spike in fatal drug overdoses that many officials have called an outright “crisis.”

Of course, not everyone has supported the opening of the facilities.

In an interview with CP24 earlier on Tuesday, Coun. Giorgio Mammoliti warned that there will be repercussions.

“In six or seven months we will have an outcry of people saying ‘What did we do to ourselves?’” he said. “Not only are we legitimizing it and encouraging people to break the law and take drugs, we will be turning a blind eye to it, so basically you are legalizing it in three different areas of the city. You are not only going to get people using the safe injection sites but you are going to get people using the sidewalks and the parks and the neighbourhoods to do this including the drug dealers.”

Last summer, Toronto city council voted 36-3 to create three supervised injection sites following a recommendation from the board of health.

According to Toronto Public Health, individuals who visit the facilities will be provided with sterile injection supplies, education on safer injection and overdose prevention as well as access to medical and counselling services, and referrals to drug treatment.

Though advocates for the facilities have previously pointed out that they have the potential to save lives and will be located in buildings that already have needle exchange programs, Mammoliti accused the city of effectively acting as a “drug cartel” in an interview with CTV News on Monday night.

Speaking with CP24 on Tuesday, he said that the city should be worrying more about getting drug addicts the help they need rather than a venue where they can use intravenous drugs under the supervision of medical professionals.

It should be noted that a series of surveys of residents in the neighbourhoods where the three safe injection sites will operate previously found widespread support for the facilities.

In fact, between 84 to 96 per cent of the respondents identified benefits associated with supervised injection sites while only 14 per cent to 36 per cent identified concerns.

Toronto Public Health has also cited research which shows that the crime rate near a safe injection site in Vancouver has not increased since the facility opened its doors and has actually went down as it pertains to thefts and vehicle break-ins.

“Supervised injection services do not contribute to more crime. They are located in neighbourhoods where there is a demonstrated need, usually where drug use is already having an impact on the community. There is considerable research on this subject,” a frequently asked question segment of Toronto Public Health’s website reads.

In a statement on Monday, Mayor Tory vowed to speed up the opening of safe injection sites and to continue to work with harm reduction officials to mitigate the effects of the opioid crisis.

“Every overdose death in our city is a tragedy and is preventable,” Tory said.