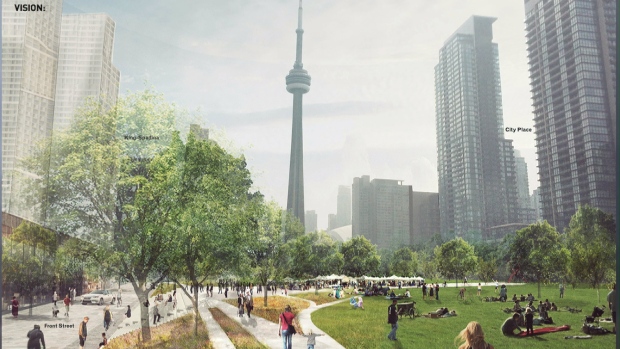 Council has voted to begin expropriation proceedings for the air rights needed for the first phase of Rail Deck Park despite a last-ditch appeal from a developer to instead consider a compromise solution centred around a mixed-use development with a 12-acre public park.

The city’s ultimate vision for “Rail Deck Park” is a 21-acre continuous green space that would be built on a decking above the rail corridor from Bathurst Street to Blue Jays Way but they intend to build it in phases.

The first phase only calls for the development of about four acres of green space between Spadina Avenue and Blue Jays Way, which would include the city's existing one-acre Northern Linear Park property.

In arguing for the authorization to begin expropriation proceedings, staff said that negotiations with the owner of the air rights for the remaining three acres of the site have been ongoing since 2018 but have gone nowhere.

The owner of the air rights - Craft-Kingsmen Rail Corp – is making its own pitch, though.

In an open letter that was sent to Mayor John Tory prior to the start of Wednesday’s council meeting, the developer asked for the staff recommendations to be put on hold to allow for “careful consideration” of its proposal for the site.

That proposal would involve the development of a mixed-use community that would include a 12-acre public park to be built in partnership with the city.

In the letter, the developer conceded that it was “unusual” for “a property owner to make offers to a potential purchase” but said that it wanted to do so in order to settle the matter in “an expeditious, cost-efficient, and non-confrontational manner.”

To that end it said that it would sell the air rights for the park component to the city for $340 million or rent them for $25 million per year, allowing the city to avoid a significant capital expense. It also said that it would also provide the structural deck upon which the park would be built for another $200 million.

“Even with a generous budget of $25 million for landscaping, the total cost of the finished park will be $565 million, which is less than one-third of the city’s current Rail Deck Park budget ($1.7 B),” the letter notes. “This represents approximately $1.135 billion in savings to the city.”

Staff have said that they believe the gap in negotiations for the air rights to be “unbridgeable,” making expropriation necessary.

But the developer says that it is “confused by this conclusion,” given the fact that only four meetings were held and that they were suddenly stopped in the midst of discussions over the terms of reference for an appraisal.

The developer also points out in the letter that its interest in building on the site predates the cities.

They say that they purchased the air rights in 2013 and met with city planning staff to discuss the project in January, 2016, months ahead of an August news conference in which Mayor John Tory announced his vision for Rail Deck Park.

“We trust the expropriation process and we believe it will result in a fair settlement, but we would rather proceed with our vision for the ORCA Project,” the letter notes. “We put our money where our mouth is by closing on the air rights and investing many millions of dollars in engineering, consultant studies, and other fees.”

‘They are in the business of building condos,’ Tory says

While the staff recommendation adopted today will empower them to begin expropriation proceedings if necessary, Mayor John Tory told reporters earlier on Wednesday that he would like to see “one more try at negotiating first."

Tory also said that he would “take a look” at the proposals contained in the open letter but will not accept a lesser vision for Rail Deck Park.

In addition to Rail Deck Park, council also approved an ambitious plan to invest millions of dollars in cleaning up the city’s ravines during Wednesday’s meeting.

The city first adopted a ravine strategy in late 2017 but money was not immediately set aside for the initiative.

At today’s meeting council unanimously approved an implementation plan for that strategy as its first order of business.

The plan calls for an additional $104.9 million capital investment in maintaining the ravines over the next decade on top of the $460 million that has already been set aside in the staff-recommended budget.

It also calls for the city to invest an additional $1.2 million in “ravine litter collection and invasive species control” in 2021 with the level of new funding rising to $2.7 million annually by 2024.

About 10 per cent of the 179 species found in the city’s ravine network are invasive species, according to staff.