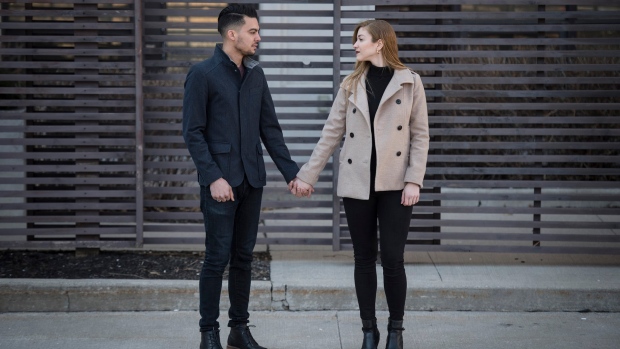 Giovanna Loureiro and her fiance Jeffrey Nunes, pose for a photograph near their home in Toronto on Saturday, March 21, 2020. When Giovanna Loureiro and Jeffrey Nunes get married this Friday, it won't be with their 150 invited guests, nor at the lush greenhouse venue they had booked in Newmarket, Ont. And they won't be going on their planned honeymoon to the Maldives and Dubai. THE CANADIAN PRESS/Tijana Martin

TORONTO -- When Giovanna Loureiro and Jeffrey Nunes get married this Friday, it won't be with their 150 invited guests, nor at the lush greenhouse venue they had booked in Newmarket, Ont.

And they won't be going on their planned honeymoon to the Maldives and Dubai.

Instead they'll tie the knot at an empty Toronto photography studio with just themselves, their pastor and their parents.

No post-“I do” hugs or kisses with their loved ones. Everyone but the couple will be maintaining a safe physical distance from each other during the ceremony, which will be on a Facebook live stream for close friends and family.

“Only air hugs, waves, winks or kisses in the air,” Loureiro says.

“It's a little bit scary, but we don't have any other option.”

The two are among legions of engaged couples frantically trying to postpone, cancel or craft a scaled-down social-distancing plan for their pending union during the COVID-19 crisis.

For those with weddings scheduled a few months from now, it's an impossible task of looking into a crystal ball to predict how the pandemic will play out and whether they should turn to a plan B.

“It's kind of like a sit-and-wait game, which is really hard in the event industry because it's always 'go go go, plan plan plan,”' says Alexandra McNamara, owner of Toronto-based wedding planner company Blush and Bowties.

“Because we do about 50-plus weddings a year, the one challenge for us is if we actually have to re-plan 50 weddings. So we're just trying to focus on what we can focus on, which is April and May, and then helping our clients in the summer feel supported and look into their contracts and potentially look at holding dates in the future.”

Loureiro says they suspended their wedding planned for this Saturday after a state of emergency was recently declared in Ontario.

They were able to rebook the big bash with no penalty from the venue - on Sunday, Aug. 2, which they worry may also end up being postponed.

The couple is eager to get married, which is why they're still doing the small ceremony on Friday. They had to scramble to let all their vendors and guests from as far away as Brazil know of their new reception date.

“We're just trying to focus on the big picture - and that's getting married. The party is just an add-on and it will happen sooner or later. Not exactly how we planned or dreamed, but what can we do? It's just out of our control.”

Lysandra Deschenes of Toronto was also supposed to get married this Saturday, at an art gallery with 100 guests in Oshawa, Ont. She was able to postpone early last week, to Oct. 10, without penalty from the venue.

The immigration law clerk was up all night as soon as they rebooked, contacting vendors and guests, some of whom live outside the province. Luckily they already had a wedding website and used e-vites, which can both be altered to reflect the new date. Their young flower girls and ring bearers will likely need new outfits, though.

“I think I'm coming to terms with it now after three or four days, but it's honestly been devastating,” says Deschenes.

Luckily, vendors and venues have been “accommodating and kind,” says McNamara providing flexible policies during this unprecedented time.

For some, like Loureiro and Nunes, the biggest hassle has been trying to get ahold of airlines and travel agents to either cancel or rebook their honeymoon.

WeeStreem, a Niagara Ont.-based live-stream production company, says it's getting more inquiries from pandemic-affected couples looking to virtually share their intimate ceremonies with guests who can't be there.

“A lot of people are waiting day to day to day, to see what's going to unfold,” says Kevin Jack, who co-owns the business with Brandon Schram. The two provide multiple wireless cameras and help set up the online broadcasts on any platform, which they plan to do from a safe social distance.

Shauna Reeves and Thomas Sherwood plan to record their own video of their living-room wedding ceremony set for April 4 in Whitby, Ont., and share it later with friends and family.

The had originally planned a bigger event with loved ones that same day in Muskoka, Ont.

They will still have an officiant, who will maintain a physical distance, and the couple's three children, who will partake in the family vows.

“We told our kids that we would just have a dance party, so I guess we're going to be in our living room, maybe eating takeout, if we can still get takeout,” says Reeves.

Loureiro and Nunes also plan to celebrate their nuptials in their living room.

“We're just going to Netflix and chill. What else can we do?” Loureiro says with a laugh.

“We already have champagne and cake. Not exactly what we wanted or what we thought would happen. It's so insane how things can change in 10 days.”