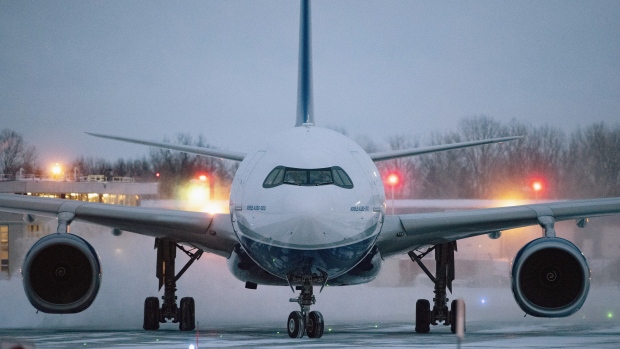 A plane carrying 176 Canadian citizens from the centre of the global novel coronavirus outbreak in Wuhan, China, arrives at CFB Trenton, in Trenton, Ont., on Friday, Feb. 7, 2020. Hundreds of Canadians and their family members are to be released from quarantine today after two weeks in isolation at an Ontario Canadian Forces base. THE CANADIAN PRESS/Justin Tang

OTTAWA - A plane carrying 129 Canadians and their families who have spent weeks confined to cabins aboard a coronavirus-stricken cruise ship in Japan landed on Canadian soil this morning.

The former Diamond Princess passengers can expect to undergo another two weeks of isolation at the Nav Centre in Cornwall, Ont., where they will be monitored for potential signs of the coronavirus, or COVID-19.

All of them were tested for the virus by Japanese officials before they left the ship, which has been docked in Yokohama, Japan, since early February. So far none shows any symptoms of the virus.

Canada chose to re-quarantine the passengers after they've already gone through two weeks of isolation aboard the Diamond Princess because new cases were still cropping up on the ship at the end of the incubation period, said Canada's top public-health official Dr. Theresa Tam Friday.

“We are doing this out of an abundance of caution,” she said.

The ship was the site of the largest outbreak of COVID-19 outside of China, where the virus originated. The Diamond Princess had more than half of the confirmed cases outside that country.

Canadian passenger Lolita Wisener said she was amazed to feel her eyes well up when she saw the Canadian flags on the medics' white coveralls as they boarded the plane in Japan.

“Everyone, without exception, has said 'welcome home' when they see us,” Wisener said upon her return to Canada. “It's wonderful to be Canadian!”

The Canadian Red Cross has already made sure they have care packages, including toiletries, which she said was a “blessed relief.”

There were about 250 Canadians originally aboard the ship, and of those 47 contracted the illness and were not allowed to return home. They have been admitted to a dozen hospitals in Japan near Yokohama, Foreign Affairs Minister Francois-Philippe Champagne said, and they will remain in Japan for treatment while they receive “tailored” consular services.

He said the Canadian government has made sure those people have special dietary needs met, are able to communicate with their families and receive interpretation services.

Others who chose to stay behind - with loved ones who are sick, for instance - will be subjected to a mandatory quarantine when they return to Canada on commercial flights.

Those who were allowed to return landed at Canadian Forces Base Trenton at 2 a.m. Eastern time, where they were screened for symptoms before they were taken by bus to Cornwall. They are to be confined to rooms in the Nav Centre until they are released from quarantine.

“The returning Canadians have been through a stressful experience over the past couple of weeks. During their quarantine in Canada, we will offer support for both their mental and physical well-being,” Health Minister Patty Hajdu said in a written release Friday.

The Diamond Princess evacuees will be subjected to the same screening as the Canadians who were repatriated from Wuhan, China, the centre of the outbreak - hundreds of whom were released Friday.

The 213 evacuees who left quarantine at CFB Trenton were the first to arrive from Wuhan on Feb. 7.

Government officials say none of the evacuees at the base has shown any symptoms of the virus during their stay, and Tam said there will be no need for public health to maintain contact with them.

“They pose no health risk to Canadians,” Tam said, reinforcing that those released from quarantine have gone through a stressful time and deserve privacy as they get back to their lives.

Hajdu says the government is helping all the evacuees with their travel plans and will be transporting them to Toronto, but all will be expected to make their own ways home from Ontario.

-With files from Hina Alam in Vancouver