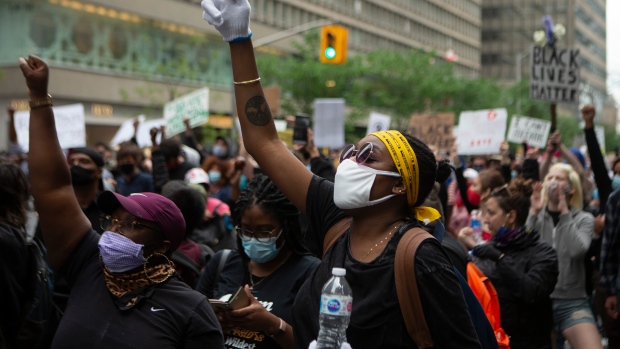 Demonstrators take part in a rally protesting the death of Regis Korchinski-Paquet in downtown Toronto, Saturday May 30, 2020. Korchinski-Paquet, 29, fell from the balcony of a 24th-floor Toronto apartment while police were in the home. Thousands of protesters took to the streets to rally in the aftermath of high-profile, police-involved deaths in both Canada and the United States. THE CANADIAN PRESS/Chris Young

TORONTO -- The death of a Toronto woman who fell from her 24th-floor balcony while police were in her home has renewed calls for an overhaul of how society deals with people in mental health crises.

Some experts believe "defunding" police -- taking some of the taxpayer money going to law enforcement and putting it towards mental health services -- is one way to avoid deadly interactions between officers and people struggling with mental illness.

The blowback follows the death last week of Regis Korchinski-Paquet, a 29-year-old woman whose family asked police to take her to a mental health hospital. Police have said they were responding to an assault call, but the family has questioned the role of Toronto officers in her death. The province's police watchdog has taken over the case.

"I think it's unfortunate we've come to a place in our society that police become first responders to people who are experiencing a mental health crisis," said Akwasi Owusu-Bempah, an assistant professor of sociology at the University of Toronto Mississauga.

"What we should do is take back that money, to defund police, and give it over to mental health professionals who are better equipped to help these people."

He suggested there should be another number to call, rather than 911, for those in crisis, so mental health care workers can intervene, rather than armed officers.

Toronto police respond to about 30,000 mental health calls every year, out of nearly one million calls that the force responds to, said spokeswoman Meaghan Gray.

The force's mobile crisis intervention teams, where a trained officer and a mental health nurse respond to those in crisis, attend 6,000 of those calls each year. Those teams do not go to calls where a weapon may be involved.

"We have expanded the program over the years and will continue to do so with the resources that are available to us," Gray said.

"However, it is important to note that all police officers are trained to respond to mental health issues."

That annual training consists of courses on communication and de-escalation techniques, she said.

"The Toronto Police Service believes that mental health is a complex issue that requires the involvement of multiple entities, including but not limited to community support, public health, and all levels of government, to render any meaningful change," Gray said.

There have been a number of high-profile cases over the past decade that involved the deaths of people in crises at the hands of police.

Dr. Patrick Baillie, a psychologist and lawyer, has spent 25 years working with Alberta Health Services and the Calgary police and is usually on call 24 hours a day to help the force deal with those in crisis.

Baillie supports the call for more mental health resources to help those in crisis and let police focus on enforcing the law.

"We have made police officers into the people who respond to all sorts of forms of social difficulty," he said. "At what point do you say, these things aren't policing?"

About 10 days ago, Baillie said he received a call from a police negotiator who was stationed outside a man's home in Calgary with the tactical squad.

A man had been yelling randomly from his porch. When his neighbours told him to shut up, Baillie said, the man made some sort of threat then returned inside. He said police were working on getting a warrant so they could send in the tactical team.

"They tell me the rest of the story: he's a known police hater, he's paranoid, ...and the police and crisis team has dealt with him before," he said.

"I said 'if the neighbours call again, just call me and I'll go for a drive,"' Baillie said.

No one called. When he checked in on Monday, police told him they went back and said the man was fine and the mental health crisis team took over to help him.

"You're looking for community support and community intervention rather than law enforcement," he said.

"If you have a sufficient number of mental health experts available to police, you can have better outcomes."

Camille Quenneville, the CEO of the Canadian Mental Health Association's Ontario division, pointed to two crisis centres in the province that are having promising results.

One is in London, Ont., that operates 24 hours per day, she said.

"This is a place where police can take somebody in crisis," she said. "They immediately get their mental health needs looked after."

The centres allow people in crisis to avoid emergency rooms and provide specialized mental health services around the clock.

Ideally, she said, the mental health system needs to be revamped so people aren't in crisis to begin with. But that would require significant investment in mental health care, she said.

And as people spend months cooped up in their homes due to the COVID-19 pandemic, things will likely get worse, Quenneville said.

"The mental health crisis isn't looming, it's here now and we need to act," she said.

Syrus Marcus Ware, of Black Lives Matter -- Toronto, says now is the time to find alternatives to calling police when someone is in the throes of a mental break.

He points to the Gerstein Centre -- a 24-hour community-based mental-health crisis centre with its own mobile crisis response team -- as one of those alternatives.

"We don't have to call police if we're struggling, we can figure out a better way, but we need more of these programs."