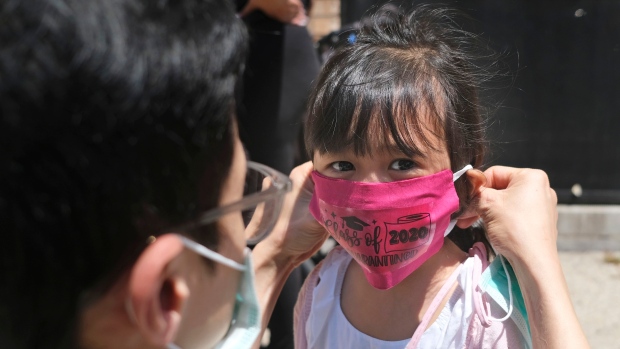 FILE - In this June 10, 2020, file photo, Olivia Chan's father helps her with a new mask she received during a graduation ceremony for her Pre-K class in front of Bradford School in Jersey City, N.J. School districts across America are in the midst of wrenching decisions during the summer about how to resume classes in settings radically altered by the coronavirus pandemic, with socially distanced school buses, virtual learning, outdoor classrooms and quarantine protocols for infected children as the new norm. (AP Photo/Seth Wenig, File)

Doctors consulted to create a guidance plan for reopening Ontario schools now say masks should be used in middle and high schools in some instances, but remain torn on whether to recommend mask use for smaller children.

As part of the hospital's updated guidelines for school reopening in September, SickKids Hospital epidemiologists recommend cohorting younger students into groups that do not change, staggering lunch and recess breaks to keep groups separate and using increased ventilation or outdoor instruction when appropriate.

But an earlier iteration of SickKids' reopening document outright rejected use of non-medical masks by students, saying any potential benefit would be outweighed by the potential for improper use and the general anxiety impact for small children to be masked all day.

They appear in part to have changed their tune.

"There was not full agreement among contributors on the need and role of (non-medical mask) use in children in different circumstances," SickKids said Wednesday.

Of the 36 Ontario epidemiologists and health experts consulted by SickKids, only two thirds said masks should be avoided entirely at the elementary school level, with the remaining third saying they should be used in situations where physical distancing is not possible.

At the high school level, more than 80 per cent of the experts supported use of masks at least in situations where physical distancing could not be maintained.

He did not say whether Ontario’s Ministry of Education had accepted their recommendations but said they have an "extremely professional and constructive" relationship.

Doctors said all of the guidance developed for schools assumes the province does not revert back to COVID-19 case growth of more than 200 cases per day.

If that occurs, measures including a return to virtual classes might be necessary.

Dr. Jeffrey Pernica of McMaster Children's Hospital said that going to school is not like going to a grocery store or getting takeout, and the guidance around masks will be more nuanced.

"Being in school is not the same as going to a grocery store or restaurant – that's why guidance should not be the same," he said, adding that schools have not been significant sources of virus transmission in other countries where they have reopened.

He called it a secondary line of defence against the virus, one that comes with caveats including improper use and disposal.

"The lower the level of COVID-19 in the community with the school, the less benefit there for masking, but the risks remain the same."

One metre of distance okay in a pinch

Doctors consulted by SickKids also said that in lower grades, physical distancing of desks by one metre, rather than the commonly accepted two, might be acceptable.

They also stressed that anyone with anything even remotely resembling a symptom of COVID-19, even sustained sniffles, needs to stay home.

Boards have entertained the implications of keeping class sizes to 15 students for each cohort, but the doctors said there is no best number for keeping students together, so long as they don't mingle with other groups and can maintain physical distance in class.

They still say students with compromised immune systems or other complex health challenges should be allowed to complete schooling from home.

Of the roughly 2,200 people under the age of 19 who have tested positive for COVID-19 in Ontario since the outbreak began, SickKids said they have treated about 700 of them.

Of those, only 15 required admission to hospital for treatment, and only one was ever treated in intensive care.

All made a full recovery.

'Everyone's nervous when you are dealing with kids'

Speaking to reporters at Queen's Park during his daily COVID-19 news conference, Premier Doug Ford said the education minister's plan for sending kids back to the classroom in the fall will be based on advice from medical professionals, including those at SickKids.

"I know the minister is going to be rolling out his plan this week and he is taking his advice from SickKids Hospital, UHN, other hospitals throughout the province, consulting with the boards. They are the experts when it comes to health and I highly recommend that we follow the health experts," Ford said.

He added that the situation is uncharted territory for countries around the world.

"This is a path we are going down that nowhere in the world, they don't know what exactly is going to happen... Is everyone nervous? Are parents? Sure they are nervous. I'm nervous. Everyone's nervous when you are dealing with kids. " the premier said.