Dozens of new trips being added across GO Transit network 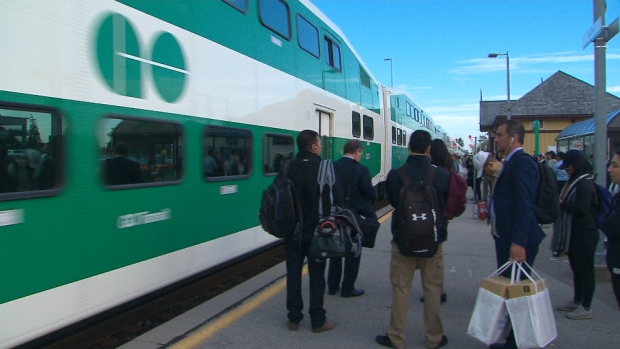 GO Transit riders are seen here in this file photo.

The province has announced plans to add dozens of weekly train trips across the GO Transit network, including the introduction of year-round weekend service between Toronto and Niagara Falls.

Minister of Transportation Caroline Mulroney made the announcement during a news conference at Union Station on Thursday morning, noting that the improvements are part of an ongoing expansion program that will ultimately “transform GO into a comprehensive two-way, all-day rapid transit system.”

She said that as of Aug. 31 there will be an additional 84 weekly train trips on the Kitchener, Lakeshore East and Lakeshore West lines as well as another 65 existing trips that will be extended to stop at more stations.

Some of the highlights of the service improvements include the introduction of late-night weekday service between Kitchener GO Station and Union Station as well as the introduction of all-year weekend service to Niagara Falls. That service previously only ran from June 21 to Sept. 2.

The existing 6 p.m. trip on the Kitchener line from Union Station will also be made express to Bramalea GO Station, saving commuters an estimated 20 minutes. A 5:45 p.m. train will also be added on that line to accommodate riders travelling Bloor, Weston, Etobicoke North and Malton GO stations.

“Whether you are going to school, work, a sporting event or spending time with family and friends these service increases will give you more choices and leave you with more time for what matters most,” Mulroney told reporters. “More trains offering faster and more frequent service means people can choose the train that fits their schedule instead of planning their schedule around the trains.”

The province says that 50 of the news trips will be on the Kitchener line with another 15 on the Lakeshore East line.

Service will also be improved on the Lakeshore West line with the number of rush hour trips in and out of Hamilton’s West Harbour GO Station being doubled.

All told, the additional trips across GO Transit’s network will mean an additional 77,308 seats per week.