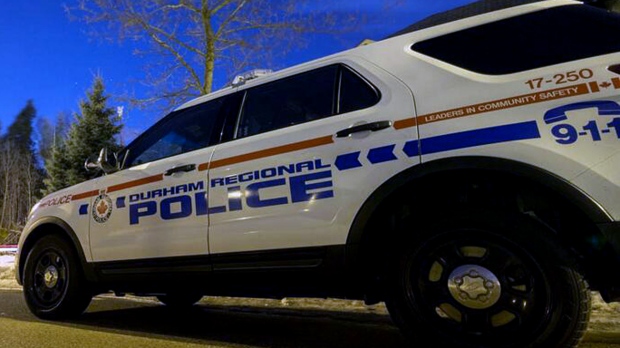 A Montreal man is facing a long list of charges after he allegedly crashed into three different vehicles while fleeing from police in a stolen SUV in Durham Region last week.

Police say that officers were first dispatched to a plaza near Taunton Road East and Harmony Road North in Oshawa at around 2:30 p.m. on Friday for a suspicious vehicle call.

They say that officers then determined that the vehicle was stolen from a residence elsewhere in Oshawa earlier that day.

It left the area prior to officers moving in but was later located near Baldwin Street North and Highway 407.

Police say that officers attempted to stop the vehicle at that time but the driver refused to pull over.

Police say that they then discontinued the pursuit to “safety concerns.”

The stolen vehicle continued driving erratically and struck an occupied Dodge Caravan near Winchester Road East and Baldwin Street North and then struck an unoccupied red Audi AQ5 and an occupied GMC Terrain,” a release issued on Monday notes. “One of the occupants was taken to a local hospital with non-life threatening injuries.”

Police say that the driver of the stolen vehicle attempted to flee the scene on foot following the collisions but was eventually apprehended in a wooded area with assistance from the K-9 unit.

Jean-Baptiste Ronel, 19, of Montreal, is facing nine charges, including flight from police and theft of a motor vehicle.

He is being held in custody pending a bail hearing.