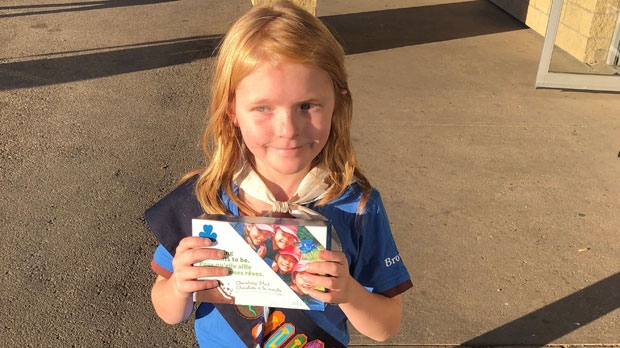 Nine-year-old Elina Childs poses as she sells Girl Guide Cookies outside a cannabis store in Edmonton on Wednesday, Oct. 17, 2018 in this handout photo. She's being called one smart cookie. As people lined up to buy marijuana at one of six Edmonton cannabis stores that opened Wednesday, there was a small entrepreneur in the crowd. Nine-year-old Elina Childs had a wagon full of Girl Guide cookies for sale. THE CANADIAN PRESS/HO - Seann Childs

As people lined up to buy cannabis at one of six Edmonton cannabis stores that opened Wednesday, a small entrepreneur stood ready to capitalize on what could be expected to be customers' future need for a sweet snack.

Nine-year-old Elina Childs had a wagon full of Girl Guide cookies for sale.

"We've sold cookies in the neighbourhood before with her and it's door to door. People aren't home. There's dogs and everything else," said her father, Seann Childs. "We thought, 'Where can we go to sell them?'

"It just so happens that legalization was coming up in a couple of days."

He and his wife talked to Elina and she thought it was a good idea.

When she got home from school, she grabbed some change from her piggybank. She and her dad loaded up a wagon with three cases of Girl Guide cookies and they walked to the nearby cannabis store.

She started walking up and down the lineup.

"It was well received," said Childs.

"People thought it was awesome. There were people telling her she was doing a great thing, that it was very innovative. There were cars stopping on the street to buy cookies from her. It was really something else. I'd never seen anything quite like that."

Childs said he expected it to go well, but he never thought they would sell out in 45 minutes.

"We were sold out in no time."

An official with the Girl Guides praised Elina's strategy.

"Good on her and her family for thinking of it," said Edmonton commissioner Heather Monahan. "It's fun and it's different and what better way to get rid of cookies."

A social media post on Elina outside the pot store went viral and Monahan said they started getting questions about whether it was allowed.

"Why wouldn't it be?" she said. "It wasn't like she was in the store -- that would be a whole different ball game.

"I think it's wonderful."

To make it even better, Elina's parents were able to use the experience as a teaching moment for their daughter.

"She actually has cystic fibrosis, so we encourage her to get out there and do things and be active," Childs said. "Girl Guides is one part of that."

He noted that smoking is usually harmful to her.

"This was one day she could benefit from smoking," said Childs. "We saw that as an opportunity to get out there and teach her a little about what cannabis is.

"Obviously she's not going to be using it before she's 18, I hope, but we like to have frank discussions with her, so she understands what it is and take away that mystery behind it -- just to show her people of all ages and all walks of life are doing this and it's legal in Canada now, just demystify it for her so it's not a big deal for her."