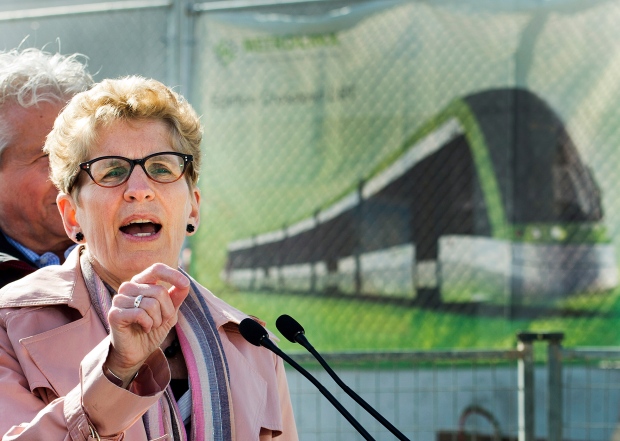 Liberal Leader Kathleen Wynne speaks to the media during a campaign stop at the construction site of the Eglinton LRT on Eglinton Avenue West in Toronto on Tuesday, May 6, 2014. (The Canadian Press/Nathan Denette)

TORONTO -- If you build it, they will come.

That was the message Premier Kathleen Wynne was broadcasting Tuesday while touting her plan to spend billions on public transit, roads and bridges if her Liberals are re-elected.

"People want more public transit," she said during a stop at a site where construction is underway for a new Toronto light-rail line.

They will want to use it if it's as convenient or more convenient than driving to get where they need to go, Wynne said.

"I lived in the Netherlands for three years," she said. "It was way easier to for me to get on a tram than it was for me to drive my car. It's very important that we recognized that making public transit more convenient is what this is about."

Last Thursday's budget proposed to provide $29 billion over the next decade for transit and transportation infrastructure, divided equally between the Toronto-Hamilton area and the rest of the province.

The budget said the money would come from restricting tax credits for large corporations, stopping construction companies from claiming the fuel tax exemption and increasing the tax on aviation fuel by four cents a litre. They'd also redirect about $1.3 billion a year in gas taxes from general revenues to transit, as well as generate cash through high-occupancy toll lanes and the sale of provincial assets.

About two thirds of the money would come from the province's dedicated revenue tools, about a quarter from provincial borrowing, including green bonds, and the balance from the federal government. The money would be allocated by population using census data, the budget said.

Wynne didn't provide many details of how the money would be allocated for different projects or the criteria for obtaining funding. She said there are projects already underway that are high priorities, such as increasing GO Transit service in the Toronto area and a light-rail line in Ottawa.

"We'll be working with municipalities to make sure that their priorities are the ones that become part of the strategy," she said.

The Liberals propose to fill the hole in its coffers left by the loss of gas tax revenues by hiking taxes on higher-income earners and tobacco.

But they eschewed other so-called revenue tools proposed by provincial transit authority Metrolinx and their own advisory panel, such as raising fuel taxes and the Harmonized Sales Tax. They also rejected the NDP's proposal to increase corporate taxes to fund transit, saying it would be "extremely risky in our economy."

The New Democrats and a union representing Toronto transit workers have accused Wynne of trying to privatize public transit in the city, saying a 30-year maintenance contract for the light-rail line has been awarded to a private company.

"I don't trust the Liberals for a minute not to go down that road," Horwath said.

Wynne, who slammed the other parties for failing to expand transit in Toronto when they were in government, said Horwath's claims "just are not true." She said her government has been working with the private sector, but believes that public transit must be publicly owned.

"Quite frankly, I would have thought that Andrea Horwath would have been very supportive of a strategy to get public transit built," she shot back.

She spoke privately with Bob Kinnear, head of the Amalgamated Transit Union Local 113, in her campaign bus after he showed up at her news conference asking questions.

But Kinnear said he wasn't satisfied with her response and still fears transit costs will skyrocket because private companies are involved.