Seven people – including a baby – have been transported to hospital following a scaffolding collapse on Eglinton Avenue, a representative with Toronto Paramedic Services says.

It happened near Bathurst Street shortly before 2:30 p.m. The circumstances that led to the collapse were not immediately clear.

“It’s the most awful sound I’ve ever heard,” witness Pat Warrington, who was in the area at the time, described to CP24 at the scene.

“The building was in the process of being demolished when a front wall collapsed and fell on the covered walkway, with the weight of the scaffolding,” Metrolinx said in a message posted on Facebook Monday afternoon.

Three patients – two females and a male – were transported to hospital with serious, but non-life-threatening injuries, paramedics said. Their ages were not immediately known.

Four more patients, including a baby, were transported to hospital with minor injuries. Toronto Fire Services Captain Michael Westwood confirmed that a young couple and a baby were among those rescued from the debris.

“There was a mother and a baby crying with their dad sitting outside the ambulance,” Myrna Calar, another witness at the scene, described.

“It was quite mangled, but the baby is OK.”

Dogs were brought in to assist in the search for additional patients possibly trapped under the debris.

“From what we know, everyone has been rescued from the building,” Douglas-Cook said.

Calar said crews have been working at the site for “a few weeks.”

“Going forward, our primary focus is on the well-being of the injured, and our hearts and thoughts are out for them,” John Jensen, with Metrolinx, said at the scene.

“Metrolinx is cooperating fully with the investigation that is underway.”

Eglinton Avenue is currently closed west of Bathurst Street. The closure is expected to last until Tuesday morning, police said in a tweet shortly after 7 p.m.

The Ministry of Labour has been called in to investigate. 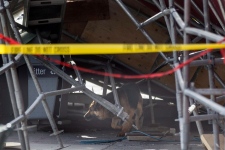 A police cadaver dog searches among the wreckage after part of a building and its scaffolding collapsed during accident on a construction site in Toronto on Monday, April 18, 2016. (The Canadian Press/Chris Young) 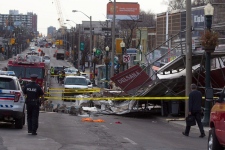 A general view of the wreckage after part of a building and its scaffolding collapsed during accident on a construction site in Toronto , on Monday, April 18, 2016. (The Canadian Press/Chris Young) 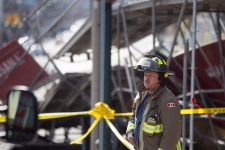 A member of the fire department stands in front of wreckage after part of a building and its scaffolding collapsed on a construction site in Toronto on Monday, April 18, 2016. (The Canadian Press/Chris Young) 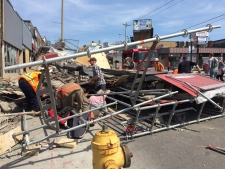