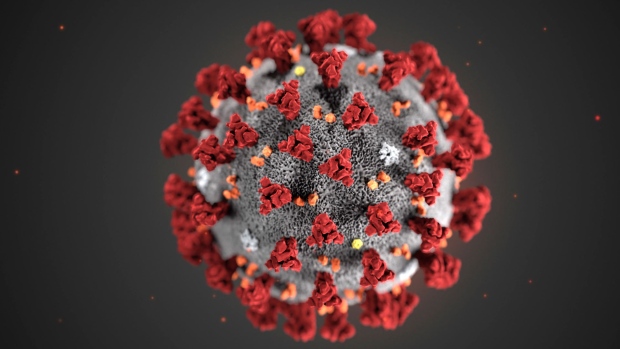 This illustration provided by the Centers for Disease Control and Prevention (CDC) in January 2020 shows the 2019 Novel Coronavirus (2019-nCoV). (CDC via AP, File)

VICTORIA - British Columbia has announced eight new cases of COVID-19, including the first apparent community transmission of the virus in the province.

Dr. Bonnie Henry, the provincial health officer, said Thursday the case of a woman in the Vancouver area is of particular concern because she did not travel recently and has had no known contact with anyone else diagnosed with the novel coronavirus.

“This is a community case and we are doing a detailed investigation right now to try and determine where her source of infection was,” said Henry, adding the woman was initially tested for influenza.

“She has not recently travelled and has no known contact with any of our known cases of COVID-19. That's something we are paying a lot of attention too, of course.”

Henry said officials are doing “disease detective work” to determine the source of the woman's infection.

“There's likely at least one other person out there who has this disease or had this disease, and we need to find them,” she told a news conference.

Henry said the number of new cases announced Thursday is not surprising, but there are heightened concerns about the possible community transmission and another case involving a woman from Seattle who was visiting family in B.C.'s Lower Mainland.

Health officials in B.C. and Washington state are also working to determine the woman's contacts and movements, Henry said.

“Clearly, that is of concern with us and we are working with our neighbours to the south in Washington state to try and determine where her exposure might have been,” she said.

The other cases involve two people who recently returned to B.C. from travel to Iran, she said. Henry said the woman in her 50s and the man in his 60s both live in the same home.

She confirmed one of the new cases involves a student at a private university in downtown Vancouver.

University Canada West said Thursday the school was informed of a presumptive case of COVID-19 a day earlier and it is taking precautionary steps by keeping the campus closed for three days.

The student with a presumptive case of the novel coronavirus was visited by the person's father, who tested positive for COVID-19 after an overseas trip, the university said.

Henry said of B.C.'s 21 cases only one person is in hospital, a woman in her 80s who remained in critical condition on Thursday in the intensive care unit at Vancouver General Hospital.