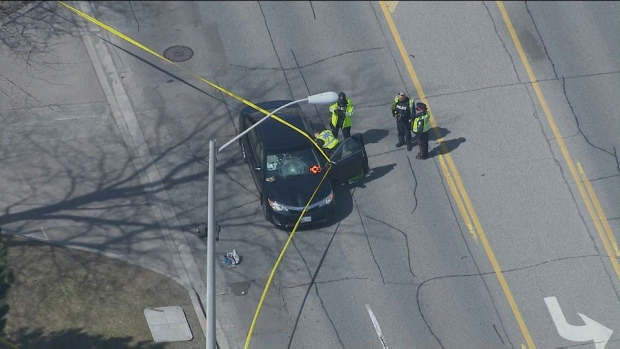 A 97-year-old man suffered critical injuries after being hit by a car in Scarborough.

An elderly man has been rushed to hospital in critical condition after he was struck by a vehicle in Scarborough this morning.

Police say shortly after 8 a.m., a 97-year-old man was crossing the street in the area of Sheppard Avenue East and Kennedy Road when he was struck by a Toyota.

The man was taken to a trauma centre for treatment and his injuries are believed to be life-threatening.

The 61-year-old driver of the vehicle remained at the scene and police say he is cooperating with the investigation.

Sgt. Alex Crews told CTV News Toronto Wednesday that the pedestrian island at the intersection was not being used at the time of the collision.

"I just ask that drivers, especially in this particular area (where) there (are) a lot of elderly pedestrians, that they be extra vigilant to ensure that they watch out for our vulnerable road users," Crews said.

Officers are asking anyone who witnessed the collision to contact police or Crime Stoppers anonymously.