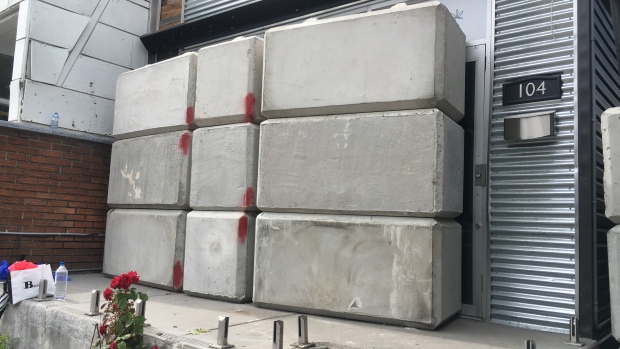 Concrete blocks ate shown outside the entrance to an unlicensed cannabis dispensary on Harbord Street on Friday afternoon. (Leena Latafat)

The city has stacked large concrete blocks outside the entrance to an unlicensed cannabis dispensary on Harbord Street for the second time this week.

The makeshift barriers were initially placed outside the CAFE dispensary at 104 Harbord Street on Wednesday following a raid but on Thursday they were gone and the illegal shop was back in operation.

The reopening, however, didn’t last long.

Staff at the dispensary tell CP24 that workers returned at around 3 a.m. and stacked the blocks outside the entrance one again, preventing anyone from going inside.

It is just the latest dispensary to be walled off with large concrete blocks as the city turns to novel ways to keep the illegal shops from reopening.

“The city will continue to make every effort to enforce the law because that is our job,” Mayor John Tory told reporters at unrelated press conference on Friday afternoon. “We have a police service and we have a licensing enforcement group to enforce the law because there are those people who insist on breaking it. If they want to try and get the law changed they should go ahead and do that. They can go to court or they could run for office. But the notion of just flagrantly breaking the law over and over and over again; I can’t even fathom that.”

A total of four illegal dispensaries under the CAFÉ banner have been raided this week and in each of those cases the city has walled off the main entrance to the businesses with large concrete blocks.

Speaking with reporters, Tory said that he continues to be “astonished” to see the operators of unlicensed cannabis dispensary so brazenly “thumb their noses” at the law.

He said that while there are steep penalties for those selling illegal cannabis, notably fines that can go up to one million dollars, it may be time for event stricter ones.

“The problem may be, based on some of the numbers we are hearing, that they are taking in more than even a million dollar fine would deter, which makes it a cost of doing business. Maybe we have to talk to the province down the road about increasing those huge fines to be even bigger so people don’t just treat it like a tax,” he said.

In a statement provided to CP24, the owners of the CAFE dispensary chain criticized the city for ignoring public interest and public safety in their quest to shut down unlicensed dispensaries.

The company claims that by erecting cinder blocks outside its dispensaries, the city has “ignored engineering reports, condominium acts and one’s peaceable enjoyment of one’s home.”

“This behaviour is reckless and embarrassing. If one wishes to control the sale of cannabis, this is not the way, by further harming Canadians,” the statement says.

On Friday afternoon, representatives from the CAFÉ dispensary were outside the Harbord Street location handing out business card to customers and directing them to their website.

City officials have said that police have laid more than 70 charges against individuals associated with the CAFE dispensaries since November.

Concrete blocks are shown outside the entrance to an unlicensed cannabis dispensary on Harbord Street. (CTV News Toronto)