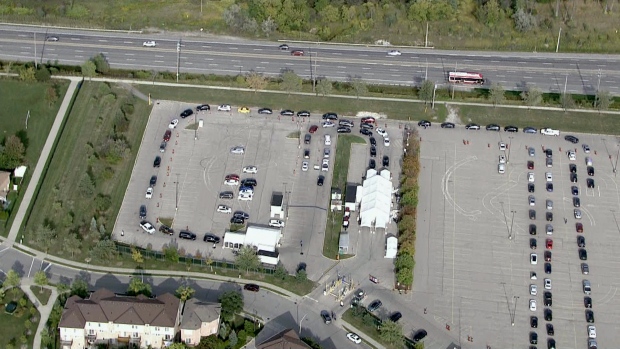 Some residents waited as long as three hours to get a COVID-19 test at the William Osler Health System's’s drive-thru testing centre in Etobicoke Monday.

The hospital said it has been experiencing “high volumes” at its two testing centres and is asking the public for its patience and cooperation.

While hospital staff told CTV News Toronto that the average wait time throughout the day Monday has been three hours, some people reported waiting as many as four to five hours just to get a test.

Staff members say the high traffic of people started on Monday of last week and has been busy ever since. As a result, they’ve capped admittance into the waiting line at 3:30 p.m.

“If you are not able to receive a test when you arrive, please return the following day, as per the testing centre’s process,” the William Osler website advises people.

The problem is not limited to Etobicoke. The Scarborough Health Network saw long lineups at its testing site at Finch Avenue and Birchmount Road.

Trillium Health Partners in Mississauga say they’ve also seen increased volumes at all three of their assessment centre since the Labour Day weekend.

On Monday, Toronto Mayor John Tory called on the Ford government to extend hours at some COVID-19 assessment centres to allow for greater access to testing.