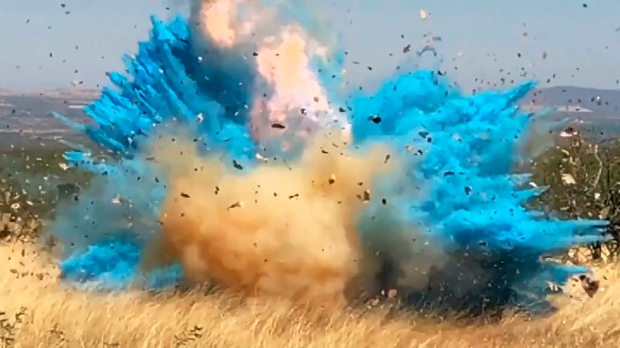 FORT MCMURRAY, Alta. - A $600 fine has been issued after a gender reveal party led to a wildfire in Alberta.

Travis Fairweather, a wildfire information officer, says the party was taking place about 10 kilometres west of Fort McMurray on May 31.

An exploding target full of blue or pink powder didn't just reveal the baby's gender - it started a significant blaze.

The fire grew in size to about half of a Canadian Football League field.

Fairweather says written permission is always required in Alberta to use fireworks or an exploding target.

“Fireworks and exploding targets - they can be fun, but they can also come with a hefty price tag if you end up inadvertently starting a wildfire.”

He says a person could also be charged with the cost of fighting the blaze.

Alberta legislation was amended in 2017 to allow for fines and the requirement for written approval.

“We were seeing enough of these exploding targets that it did require us to change the Forest Prairie Protection Act.”

It's the third wildfire caused by an exploding target this season, but Fairweather says not all were necessarily gender reveal parties.

Fairweather says 2020 was a historically quiet fire season in Alberta, but the percentage of human-caused wildfires has increased significantly.

Multiple wildfires have been linked to explosions at gender reveal parties in recent years throughout North America.

In 2020, a large fire east of Los Angeles was ignited by a smoke-generating pyrotechnic device. A firefighter died battling the blaze, which was named the El Dorado Fire.

Jenna Myers Karvunidis, who has been credited for possibly starting the trend, has since expressed disdain for what the parties have become in light of the California fire.

“Could we just stop having these stupid parties and then the problem would solve itself,” she tweeted last September.

It's also been five years since a wildfire so ferocious it earned the nickname “the beast” forced the evacuation of Fort McMurray.

Nearly 90,000 people had to flee the flames and thousands of buildings were destroyed in the northeastern Alberta oilsands hub.