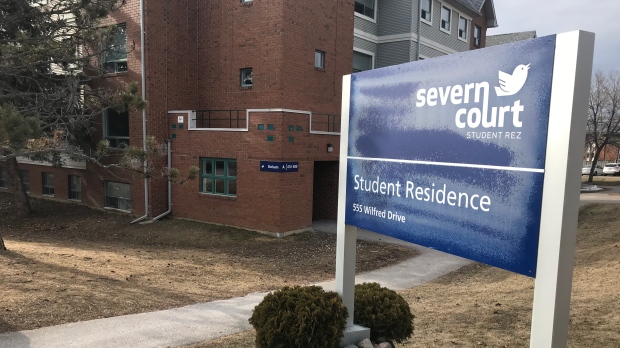 Zachary Root was a kind person with a huge heart who loved playing games. He cared about everyone’s happiness and safety. That’s how the family and friends of the 31-year-old student are remembering him.

Root died on Monday after contracting COVID-19 at a private student residence dealing with an outbreak in Peterborough. He was the city’s youngest coronavirus-related fatality.

“He cared about everyone being happy, safe and wanted to make sure he was doing what he could to protect others and stop the spread of COVID-19,” Root’s brother, Brandon, said in an email to CTV News Toronto Wednesday.

Brandon said his brother lived in Peterborough on and off for nearly 14 years. Root was attending the accounting program at Fleming College and was living at Severn Court Student Residence.

It houses about 200 students, most from Fleming College and Trent University, in six separate buildings.

The outbreak at Severn Court was declared by Peterborough Public Health on Feb. 27 and was linked to a private party that occurred a week before.

At that time, Peterborough was in the yellow-protect zone, where social gatherings such as parties are limited to 10 people indoors and 25 people outdoors as long as physical distancing is maintained.

At its peak, the outbreak resulted in 59 cases – all screened positive for a variant of concern. It is the largest recorded in the city since the pandemic began. Most cases have been resolved and only five remain active.

Root was not at that gathering.

“We acknowledge that the party-goers had no malicious intent toward my brother. There were students consistently knocking on his door throughout the night trying to get him to come and join in, but he remained inside with the door locked,” Brandon said.

“He would want this event to reinforce the vital importance of our actions and adherence to public health guidelines. Despite wearing multiple masks and doing his due diligence to wash his hands and socially distance, it was ultimately the negligence of others that caused this tragedy.”

Brandon said he spoke to his brother on the phone before he was transferred to a Toronto hospital.

“He mentioned how appreciative he was of the kindness and care he was given by those at the Peterborough Hospital. I know that he would want them to be acknowledged for everything they did for him. We appreciate the support of Peterborough Public Health, Fleming College and Toronto General Hospital,” Brandon said.

Fleming College said police are investigating the party that led to the outbreak.

“We have already acquired some external investigators to help us with this, and they are professional investigators, and yes, we are planning for disciplinary action anywhere from community work all the way to expelling students,” Fleming College president Maureen Adamson said.

She told CTV News Toronto in an email that her friend always looked out for others before himself.

“He loved games; most of the activities we enjoyed together were various video games. He also had a Rubik’s cube that he enjoyed solving as fast as he could. He was very smart with puzzles,” Greer said.

Root was a cautious person who took the pandemic seriously, she said, adding that “he was sort of a germophobe.”

A couple of weeks ago, Greer said she received a message from a frustrated Root about people in the residence attending parties and flouting COVID-19 protocols.

“We miss the hell out of him already, and it is going to take a long time for the sting to go away,” she said.

“There are so many things in our lives that we associate with him, which is going to be painful, but is also a nice way we will be able to remember the good memories we have.”

-- with files from Kerrisa Wilson and CTV Toronto's Beth Macdonell