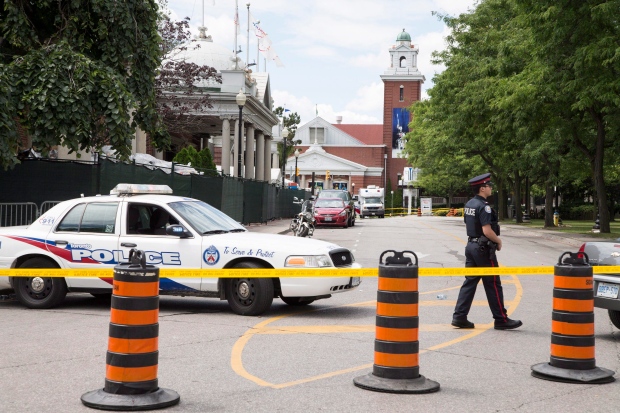 Police closed off a large area surrounding the Muzik nightclub on Canadian National Exhibition grounds in Toronto, Canada, after an early-morning shooting on Aug. 4, 2015. (The Canadian Press/Toronto Star, Bernard Weil)

TORONTO -- A popular Toronto nightclub that was the scene of a fatal double shooting failed to provide enough security to protect its patrons, the family of one of the victims alleged Wednesday.

The parents, siblings and grandparents of Duvel Hibbert made their claims in a $2.5-million lawsuit filed against the Muzik nightclub and two unknown parties believed to be involved in the 23-year-old's death.

Hibbert and 26-year-old Ariela Navarro-Fenoy died in the early hours of Aug. 4, 2015, after what police described as a "brazen" shooting that took place at a party being hosted by Canadian rapper Drake.

Three other people were injured during the incident which began inside the nightclub, where thousands were partying, and spilled into the streets north of the venue.

Michael Smitiuch, the lawyer representing the Hibbert family in the suit, said claims against the club centre on lack of preparation for what was expected to be a well-attended event.

"Given the number of patrons and given the size of the nightclub, it is our position that the amount of security was inadequate," Smitiuch said in a telephone interview.

Representatives for Muzik did not immediately respond to request for comment.

The lawsuit's statement of claim lists a number of ways in which Muzik allegedly failed to protect patrons. The statement maintains Muzik didn't provide enough police and security staff inside or outside of the venue, allowed too many guests into the club that night, and failed to take steps to keep weapons out of the event.

The statement also alleges Muzik didn't take action to step up security after previous violent incidents on the premises. Smitiuch said the club has now done so, adding that such actions further suggest that protocols were not up to scratch the night Hibbert and Navarro-Fenoy died.

The Hibbert family is sseeking $1.5 million in general and special damages, plus a further $1 million in aggrivated, punitive and exemplary damages.

The suit comes days before Muzik is scheduled to host a party to celebrate the National Basketball Association's all-star game, which is being played in Toronto on Feb. 14.

Smitiuch said the suit had been in the works for some time and the timing was coincidental.

Last year's shooting touched off a wave of concern across the city and prompted Drake offer condolences to the families of the victims. It remains unclear whether the rapper was in the club when the shooting began around 3 a.m.

Smitiuch said police have yet to identify two people believed to be connected with the shooting.