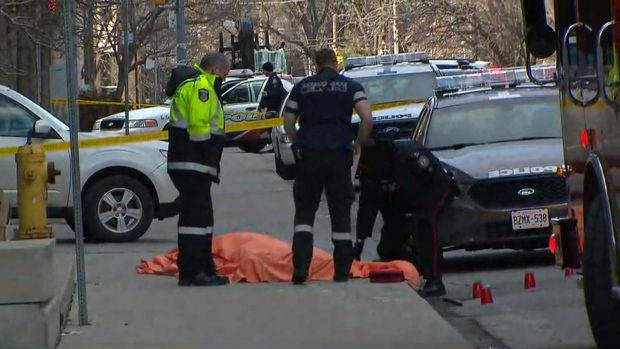 A man killed in a mid-afternoon shooting Monday has been identified as a 39-year-old from Quebec.

Sources told CP24 the victim, Anastasios Leventis, is believed to be linked to the drug trade and that he was targeted in what sources said was a gang-related shooting.

Levantis died at the scene, shortly after shots rang out at Adelaide and George streets in downtown Toronto at around 2:45 p.m.

Witnesses told CP24 they saw a man get out of a vehicle on the passenger side and fire several shots.  He then got back into the car which then sped away.

Two handguns and as many as a dozen shell casings were found strewn at the scene of the murder, Toronto police Sgt. Craig Somers told reporters.

“We don’t know who the guns belong to at this point in time or if there were multiple shooters,” Somers said.

Police said there is currently little suspect information available. However they said a nearby vehicle was struck by a blue vehicle that fled the scene. None of the occupants were injured.