Father of Toronto cop convicted in attack on Dafonte Miller was at the scene, but didn't interfere with investigation: report 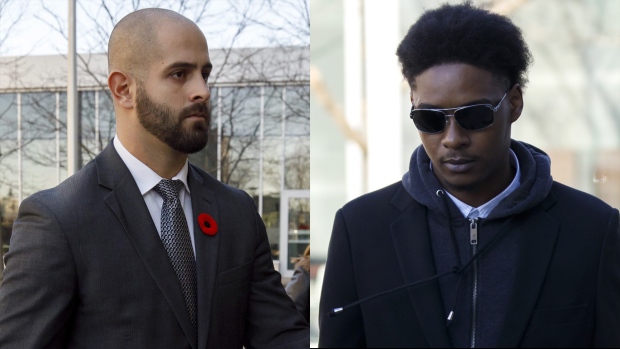 The father of the Toronto Police officer convicted of assault on Dafonte Miller came to the scene of the beating near his home to support his sons as the investigation began into the 2016 attack, a new report from police in Waterloo Region has found.

But the report couldn’t find any evidence that Det. John Theriault, who worked in the Toronto Police Service’s professional standards unit and is the father of Const. Michael Theriault, tried to influence the decision to not notify the province’s Special Investigation Unit, the report said.

“Waterloo Regional Police Service’s review confirmed John Theriault was present at the scene of the incident to support his sons after the confrontation (coming from his house that was the scene of the original interaction and in the neighbourhood),” the report says.

“WRPS [Waterloo Regional Police Service] was unable to find any information or indication that he offered any undue influence in this matter or became involved in this matter, or was involved in any decision regarding the notification of the SIU,” the report says.

The report — a supplemental to one presented to the Toronto Police Services Board last year — is the latest to describe the events around the brutal attack on Miller, which inflamed tensions between the TPS and Toronto’s Black community and underscored gaps in police accountability.

The author, Supt. Eugene Fenton, says he was attempting to address “significant public scrutiny” on the elder Theriault’s role and “a suggestion that John Theriault may have improperly influenced this investigation.”

Const. Michael Theriault was convicted of assault in connection with an attack on Miller at around 2:45 am on December 28, 2016. Miller, who was then 19, suffered a horrific eye injury.

Const. Theriault, who was off duty at the time, and his brother, Christian, had told the court they chased after Miller and his friends, suspecting they had broken into their truck that was parked outside their home in Whitby. Miller had said he and two friends were simply walking down the street.

Theriault had asked to be released from custody while he appealed his conviction and nine-month sentence with the Supreme Court of Canada, a request that was later denied.

The Toronto Police’s SIU liaison officers did not notify the SIU about the attack. However, Miller himself, through his counsel, did file a report.

Since then, the Toronto Police have updated their policies to include that the SIU should be called if any death or serious injury results when a police officer effects an off-duty detention or arrest of any person. TPS Chief James Ramer also apologized.

“Trust has been broken between the police, Dafonte Miller and the broader community. For that, on behalf of the Toronto Police Service, I want to apologize,” said Ramer in 2020.

The question of what role Det. John Theriault played has been brought up in a lawsuit by Miller and his family against the TPS and other officers involved.

Miller alleged in the notice of claim that Theriault “engaged in a conspiracy with PC [Michael] Theriault, Christian Theriault, and the investigating officers for the purpose of covering up his sons’ criminal conduct and further injuring Dafonte Miller.”

“Furthermore, Detective John Theriault failed to alert his employer, the TPS Board, that his son PC Theriault had been involved in an incident with a member of the public that resulted in serious bodily injury, such that the SIU could be notified and an investigation undertaken.”

There is a notice of intent to defend filed at the Ontario Superior Court.

CTV News Toronto has reached out to Det. Theriault but has not heard back. Det. Theriault is also the subject of an OIPRD [Office of the Independent Police Review Director] probe into his role at the incident. Det Theriault resigned in 2020, and retired officers are no longer subject to the jurisdiction of the OIPRD.