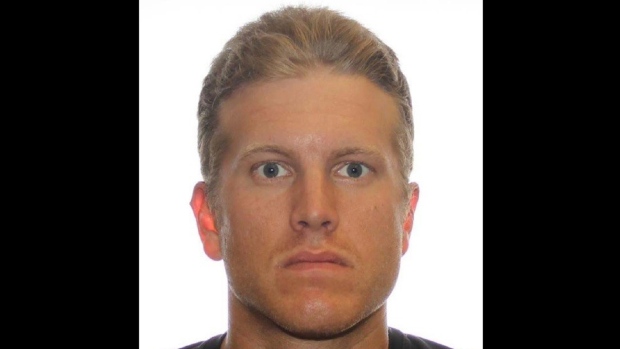 Master Cpl. Patrik Mathews, shown in this undated RCMP handout photo was reported missing to police on Monday. A former Canadian military reservist who was accused of being a neo-Nazi before disappearing last summer has been arrested in the United States. Dave Fitz of the FBI's Baltimore office says Patrik Mathews was one of three men taken into custody this morning. THE CANADIAN PRESS/HO-RCMP

OTTAWA - A former Canadian Forces engineer who disappeared after he was accused of being a neo-Nazi has been arrested by the Federal Bureau of Investigation on firearms charges and appeared in a United States courtroom on Thursday.

The arrest and court appearance were the first public signs of Patrik Mathews since he disappeared at the end of August amid allegations of having been a recruiter for the right-wing hate group called The Base.

Dressed in a brown T-shirt and camouflage cargo pants and sporting a heavy beard, Mathews was asked by Judge Charles Day in a U.S. District Court in a Maryland suburb of Washington if he understood the charges against him.

“Understood,” Mathews replied simply. He offered the same reply when informed of his rights by the judge.

Mathews was arrested along with two other men: Brian Mark Lemley, 33, and 19-year-old William Garfield Bilbrough IV. Both are U.S. citizens and also appeared in court.

Bail hearings have been set for Wednesday, when prosecutors are expected to ask that Mathews remain behind bars.

Mystery had surrounded Mathews's whereabouts since he disappeared in August amid allegations of being a neo-Nazi.

At the time, Mathews was a combat engineer with the 38 Canadian Brigade Group in Winnipeg, though the military said then it was investigating his alleged links to The Base and fast-tracking his request to be released from the Canadian Armed Forces.

The RCMP were also reportedly conducting their own investigation, though the Mounties have not confirmed the report. They had previously seized a number of weapons from a house in Beausejour, Man., about 60 kilometres east of Winnipeg, where Mathews lived.

Shortly after he disappeared, Mathews's truck was found abandoned on a rural property in southern Manitoba near the U.S. border. The RCMP said it was treating his disappearance as a missing-person case.

In a statement Thursday, the RCMP said it was aware of Mathews's arrest but would not comment on an investigation in another country.

The charges against Mathews were laid out in a news release from the U.S. Attorney's Office in Maryland on Thursday, which alleges Mathews crossed illegally from Manitoba to Minnesota on Aug. 19.

Mathews is alleged to have made his way to Michigan. Prosecutors say on Aug. 30, Lemley and Bilbrough, who are also described as members of The Base, picked him up and took him to Maryland. Lemley previously served in the U.S. Army.

On Nov. 3, according to the allegations, the three men drove from Virginia to Maryland, where Bilbrough lived. Lemley and Mathews eventually continued to Delaware, “where Lemley rented an apartment in which the two have resided since that time.”

Lemley and Mathews are then alleged to have assembled “a functioning assault rifle” from parts in December, and all three are accused of having made a psychedelic drug known as DMT.

“Furthermore, Lemley, Mathews and Bilbrough discussed The Base's activities and spoke about other members of the organization,” according to the prosecutors. “Mathews also allegedly showed the assault rifle to Bilbrough, who examined the assault rife and returned it to Mathews.”

The U.S. Attorney goes on to allege that Lemley and Mathews bought 1,650 rounds of ammunition earlier this month and then “travelled from Delaware to a gun range in Maryland, where they shot the assault rifle” and retrieved a bulletproof vest.

The statement alleges that “within The Base's encrypted chat rooms, members have discussed, among other things, recruitment, creating a white ethno-state, committing acts of violence against minority communities (including African-Americans and Jewish-Americans), the organization's military-style training camps, and ways to make improvised explosive devices.”

Windom said Bilbrough discussed a desire to fight with nationalists un Ukraine and had compared the group to al-Qaida - whose name means “The Base” in Arabic.

The prosecutor also said Bilbrough and Mathews smashed their mobile phones and dumped the pieces in a toilet when federal agents showed up.

The New York Times reported the three men had talked about travelling to a pro-gun rally next week in nearby Virginia. The rally coincides with Martin Luther King Jr. Day in the U.S., which commemorates the assassinated civil-rights activist.

Virginia Gov. Ralph Northam said in a tweet Wednesday there was credible intelligence from law-enforcement agencies of threats of violence surrounding the pro-gun demonstration planned for Monday.

In Canada, the accusations against Mathews in August and his disappearance put a spotlight on concerns that right-wing extremists have been trying to infiltrate the Canadian Armed Forces.

Several sailors associated with the far-right Proud Boys group disrupted a Mi'kmaq ceremony in Halifax in 2017. A military-intelligence report in 2018 said 30 active service members belonged to hate groups or had made racist statements.

The report also revealed some extremist groups have encouraged their members to seek military training and recruit service members.

-With files from James McCarten in Maryland and Jim Bronskill in Ottawa.