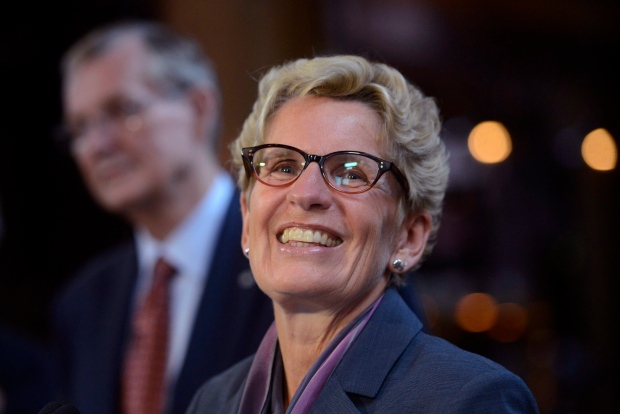 TORONTO -- Premier Kathleen Wynne is lashing out at federal Conservatives who she says are using Ontario's new sex-education curriculum to attack Liberal candidates in next Monday's election.

"The Conservative candidates, certainly in some ridings, were trying to use this issue as a wedge, and I think it's extremely unfortunate," Wynne said Thursday. "I think it is a deplorable tactic that is being used."

Wynne said even though Tory candidates are raising the new curriculum with voters as they knock on doors, she hopes parents understand sex education is not a federal issue.

"It's not something the federal candidates have any influence over," she said.

The Conservatives did not respond directly to Wynne's allegations about using the sex-ed curriculum to bash federal Liberal candidates, but said they wanted to highlight the similarities between her Liberal government and federal leader Justin Trudeau.

The sex-ed issue is especially contentious in Wynne's own Toronto riding of Don Valley West, home to many immigrant families who strongly oppose the first update to Ontario's health- and physical-education curriculum since the mid-1990s. Half of the students at the Thorncliffe Park school in the riding were kept out of school for the first day of classes in protest of the new curriculum being introduced this fall.

The fact that Justin Trudeau and the Liberals have all the momentum heading into next week's election shows the Conservatives' use of the sex-ed curriculum isn't helping them in Ontario, added Wynne.

"I don't think it's working," she said. "Trudeau is willing to work with everyone in this country, not divide them, but bring them together to solve the real problems. And the issue in Thorncliffe Park, that's not one of the real problems that are confronting this country."

The premier said the unfortunate part of the Tories' behaviour is that students really need the information in the revised curriculum, which hadn't been updated since smartphones were invented and 'sexting' became a thing.

"There are kids in all of our communities who need to be in school, who need the benefit of the information that's in the updated sex-ed curriculum, that need to understand how to interact with social media," she said. "The information in that curriculum will help them to deal with those realities in their lives."

Wynne has met several times with parents from Thorncliffe Park and found some really didn't know they had the right to take their kids out of lessons they object to without taking them completely out of school.

Wynne, who is married to another woman, has said in the past that there is a strong element of homophobia in the opposition to the updated sex-ed curriculum.