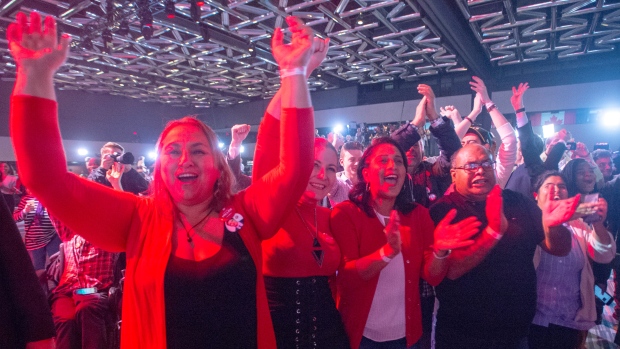 Liberal supporters react to a prediction of a Liberal government at the Liberal election night headquarters, Monday, October 21, 2019 in Montreal.THE CANADIAN PRESS/Ryan Remiorz

OTTAWA -- Canada's national price on pollution appears destined to live on as election results suggested the Liberals would win the most seats in the federal election.

So will the legislation that overhauled environmental assessments for major projects like pipelines, which along with the carbon tax were the catalysts for anti-Liberal sentiment in oil-rich Alberta.

Justin Trudeau's Liberals are poised to lead the next government with the NDP and Greens winning enough seats to back him up and even give him some stronger nudges on climate policy.

All the parties but the Conservatives ran on various promises to curb greenhouse-gas emissions using some sort of carbon pricing system, with the Liberals, NDP and Greens directly supporting a price on pollution.

Trudeau promised to come up with a plan to get Canada beyond its current 2030 target and then all the way to net zero emissions by 2050. Canada promised four years ago, when it signed the Paris climate-change accord, to cut emissions to 30 per cent less than they were in 2005 by 2030.

Although the existing Canadian climate policies don't get Canada to that goal yet, a Liberal government with the support of two parties for which the climate crisis is a top issue, will see climate take on a leading role in Parliament in the months to come.

Just in case voters didn't send that message strongly enough, Greenpeace Canada is about to spend the first 48 hours after the election spamming Liberal Leader Justin Trudeau with every possible communication tool possible. Thousands of phone calls, emails and messages on Facebook, Twitter, and Instagram will demand the new government immediately work with other parties to set up a climate response plan.

Trudeau had the $4.5-billion Trans Mountain pipeline purchase on his back throughout the election, which hurt his self-professed position as a climate leader particularly among younger voters.

The Conservatives campaigned hard on a promise to get rid of the carbon tax, with leader Andrew Scheer saying in every stump speech that his first act as prime minister would be legislation to eliminate it.

The carbon price is the best-known component of the Liberal climate plan, but other things include a clean fuel standard to make the gas we do use burn with fewer emissions, incentives to get people to buy more electric cars, and regulations to curb methane emissions from Canada's oil and gas sector.