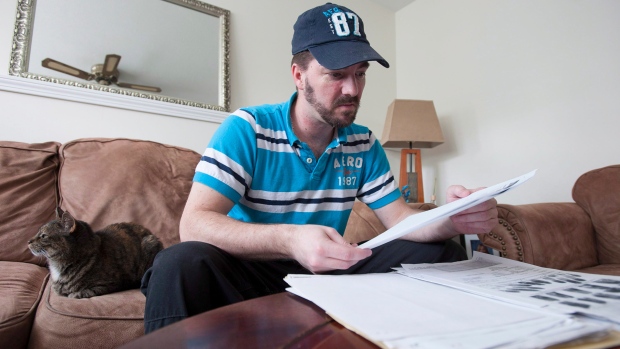 David Arnold looks through some of the documents relating to his 1992 arrest and conviction on a theft charge at his home in Fredericton, Tuesday, April 2, 2013. THE CANADIAN PRESS/David Smith

OTTAWA - The federal fee to apply for a criminal pardon will drop to $50 from almost $658 as of the new year.

The move announced Tuesday fulfils one element of a Liberal plan to improve the system by making it easier and less expensive to obtain a pardon, also known as a record suspension.

The government said in addition to the $50 processing fee, applicants are responsible for any additional fees to obtain information needed for their application, such as fingerprints, court documents and police checks.

However, the government said it will provide $22 million over five years to community-based organizations to offer support services to help people complete record suspension applications and increase awareness of these services.

The government also plans to spend money on program modernization for the Parole Board of Canada, including development of a new online portal to make the application process simpler and quicker.

This announcement comes shortly after dozens of civil society groups called on the government to automatically seal a person's record once they have completed their sentence and lived in the community without new convictions.

Samantha McAleese, a doctoral candidate at Carleton University whose research includes the current pardon system's effect on people with criminal records, said the change being announced before the new year is welcome news.

“I want to emphasize that alleviating the cost is huge,” she said, noting that the high cost has been long cited as a significant barrier for those applying for a record suspension.

That said, the move is a good first step in a series of much-needed changes to how people can have their criminal records sealed, said McAleese, who is also a member of the Fresh Start coalition.

The sentiment was echoed by Abby Deshman, director of the criminal justice program for the Canadian Civil Liberties Association.

“This is going to be a long-awaited change. But it's not nearly enough. We have known for many years that the pardon system is completely broken. The people who need it the most are unable to access it,” she said.

Moya Teklu, executive director of the Black Legal Action Centre, said in a statement, “Reducing the application to $50, will not make the process any less long, any less cumbersome, or any less complex.”

Teklu questioned the point of simplifying applications or providing funds to assist with applications, instead of simply getting rid of the process altogether.

She said records should be automatically sealed after a certain period of time.

The office of Public Safety Minister Marco Mendicino said in a statement Tuesday the application fee reduction removes a barrier to the successful reintegration of people with criminal records who have completed their sentences and are living law-abiding lives.

It added the government would continue exploring the automated sequestering of some criminal records for those living crime-free, in consultation with provinces, territories and municipalities, as well as other key criminal justice players.

In mid-November, the minister's office said that by reducing the fee and shortening the wait periods to apply for a record suspension, “we will significantly reduce barriers to reintegration and rehabilitation.”

A bill that was introduced in June, but died with the dissolution of Parliament at the summer election call, proposed to undo measures brought in by Stephen Harper's Conservatives that made people wait longer for a record suspension.

When asked whether the government would reintroduce the bill, Mendicino's office did not directly answer the question Tuesday, but said the government remains committed to working throughout its mandate to reform the criminal justice system.

McAleese said she hopes the government will more strongly consider the automatic process if it introduces another bill on record suspensions.

“Canada could quickly become a leader in helping people alleviate the burden of having a criminal record hanging over their head while they're trying to find work, trying to find housing, trying to do all the things we know that help keep people safe and supported in the community.”

This report by The Canadian Press was first published Dec. 21, 2021.