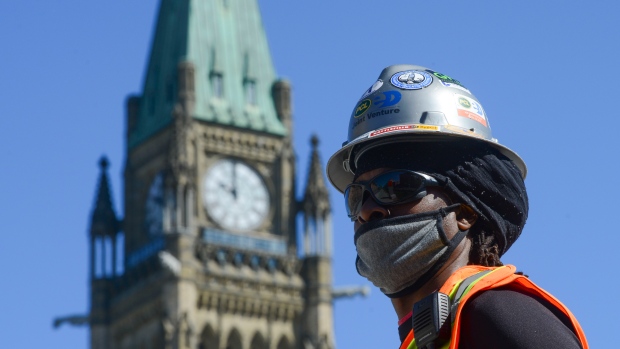 Construction worker Rory Brissett works on Parliament Hill during the COVID-19 pandemic in Ottawa on Wednesday, May 20, 2020. THE CANADIAN PRESS/Sean Kilpatrick

OTTAWA -- The Team Canada spirit that has prevailed among first ministers during the COVID-19 crisis will be put to the test today as Justin Trudeau broaches with premiers two topics that fall squarely within provincial jurisdiction: the operation of long-term care homes and paid sick leave for workers.

The prime minister has promised federal support in both areas but his offer has met with a mixed reaction from provincial and territorial leaders.

He has also promised to raise the issues tonight, when he conducts his eleventh first ministers' conference call.

So far, those calls have been notable for their collegial, collaborative spirit as prime minister and premiers all work as one to cushion the impact of the deadly pandemic on Canadians' health and the country's economy.

But there are signs that team spirit may be starting to give way to the usual regional tensions and jurisdictional spats that have historically bedevilled federal-provincial relations in Canada.

Quebec Premier Francois Legault, whose province has always jealously guarded its jurisdiction against perceived federal intrusions, is lukewarm about Trudeau's promise to ensure 10 days of paid sick leave for workers who fall ill with COVID-19 or are required to go into quarantine after exposure.

"I told Justin Trudeau this morning first, regarding sick leave, that there was a very negative reaction from the corporate side," he said Wednesday.

"Well, obviously, there is a question there that isn't clear: Who will pay?"

On long-term care homes, Legault came close to suggesting the feds should butt out, apart from sending the provinces more money for health care in general which they could then spend as they see fit.

"We're not happy about the fact the federal government used to finance 50 per cent of the health-care expenses of the provinces. They now are (funding) between 20 and 25 per cent," he said, raising an age-old provincial complaint.

At the outset of the pandemic, the federal government did increase those transfers by $500 million.

Legault's somewhat dismissive response to the offer of federal help comes even as his province has called in the military to help restore some semblance of care in 25 Quebec facilities -- and wants the federal government to extend the Forces' deployment until September.

The military issued this week damning reports on neglect, abuse and unsanitary conditions it found while helping out in long-term care homes in Quebec and Ontario.

In contrast to Legault, Ontario Premier Doug Ford, has been effusive in his thanks for the offer of federal help.

"The prime minister offered his full support and I am grateful for the prime minister's commitment to working with us to solve this problem because we need their help if we're going to fix this broken system," he said Tuesday.

Ford too is calling for more federal funding but he's gone beyond that. As far as he's concerned, "everything is on the table," including integrating long-term care homes into the public health system, which is delivered by the provinces but under the national principles of the Canada Health Act.

And he's calling for national standards for such facilities.

Trudeau was careful Wednesday not to wade into the debate over national standards or bringing long-term care homes under the auspices of the Canada Health Act. He repeatedly stressed that the federal government will respect provincial jurisdiction as it embarks on discussion with the premiers.

"I'm not going to short-circuit that conversation by putting forward aggressive proposals right now," he said. "But what I will say is the federal government is there to support, to work with provinces to ensure that in areas of their jurisdiction they are able to give Canadians the care that they and their families expect."

Treasury Board President Jean-Yves Duclos later expanded on that, saying that the federal government imposing national standards "would be aggressive" and do more harm than good.

Standards must be developed "in collaboration and in full support of the work of the provinces and territories," he said. "Otherwise we would engage in jurisdictional fights and that would be completely counterproductive."

Trudeau must also deal with the fact that not all provinces have been as hard hit by the pandemic as Ontario and Quebec and are consequently less keen to have the feds rush in with help.

For instance, Saskatchewan Premier Scott Moe's office said his province wants further clarification on the federal government's rationale behind the sick leave promise and "whether any federal funding for such a proposal would be provided."

Spokesman Jim Billington noted that Saskatchewan has already instituted its own program to "ensure individuals do not have to choose between self-isolation or work." And he said it "would not be supportive of a proposal that imposes further fixed costs on employers, including mandatory paid sick leave covered by employers" who are trying to get their businesses back on their feet after three months of lockdown.

Manitoba Premier Brian Pallister echoed that sentiment but nevertheless welcomed a national program to encourage any worker who feels ill to stay home.

"I'd like to see us arrive at some type of program nationally that would cover everybody in that event," he said Wednesday.

"This is a program government should fund federally, in partnership potentially with the provinces to some degree."

Trudeau has credited British Columbia Premier John Horgan with first raising the idea of a sick leave program. And Horgan appeared optimistic Wednesday that agreement can be reached among first ministers to put one in place.

"That's at the formative stages (now), of course, but we were persistent week after week raising the issue, building a consensus around the premiers' table, building the ask for the federal government to get involved and we've now made some progress," he said.