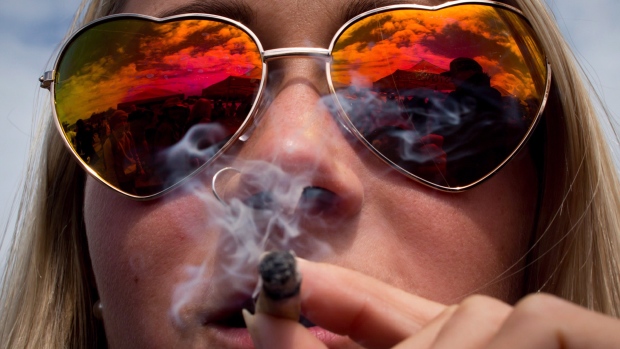 A woman smokes a joint during the annual 4-20 cannabis culture celebration at Sunset Beach in Vancouver, B.C., on April 20, 2017. Plans for a sprawling event that blended cannabis education with a traditional music festival have been snuffed out by the City of Vaughan. Organizers of the Journey Cannabis & Music Festival say new bylaws introduced by the city have forced their three-day celebration at the 990-acre Boyd Conservation Park, north of Toronto, to be cancelled. THE CANADIAN PRESS/Darryl Dyck

TORONTO - Plans for a sprawling event that blended cannabis education with a summer music festival have been snuffed out by the City of Vaughan, Ont.

Organizers of the Journey Cannabis and Music Festival say new bylaws introduced by the city have forced their three-day event at the 990-acre Boyd Conservation Park, north of Toronto, to be cancelled.

Journey, originally slated to run from Aug. 23 to 25, was supposed to combine a bring-your-own-cannabis approach with a multi-genre lineup of musicians.

The performers had yet to be announced.

The premises were also set to include a beer village, booths selling cannabis paraphernalia and culture items, and a selection of licensed producers who would discuss trends and products, but not actually sell weed.

Journey organizers say the festival signed a contract with the Toronto Region Conservation Authority and the Boyd park, but they were blindsided when a new bylaw was passed on May 14 which allowed Vaughan to regulate smoking of tobacco and cannabis within city boundaries.

Murray Milthorpe, chief experience officer of the festival, says organizers were not given advance notice that a bylaw was in the works, despite attempts to work closely with the city over a special events permit.

“At no time during our meetings with the City of Vaughan, York Regional Police, Public Health officials and Alcohol and Gaming representatives did anyone advise us that they were installing a bylaw of this nature,” Milthorpe said in a statement.

He added that organizers consulted with the city on special permits and both sides were “simultaneously working” through the submissions process.

However, representatives for the city say leadership at the Journey festival did not apply for a special events permit. They say the smoking bylaw had been under development since last year.

“The timing of the adoption of the bylaw was based on public process and reasonable timelines, following the passage of the legalization of recreational cannabis,” said City of Vaughan spokesman Michael Genova.

Electronic music event Ever After in Kitchener, Ont., allowed concertgoers to toke up, while this year's annual 4/20 celebration at Sunset Beach in Vancouver united a park of cannabis vendors with a performance by hip hop act Cypress Hill.

Organizers of the Journey festival say ticketholders will receive full refunds within the next week.

They're also searching for a new venue to host the event next year.