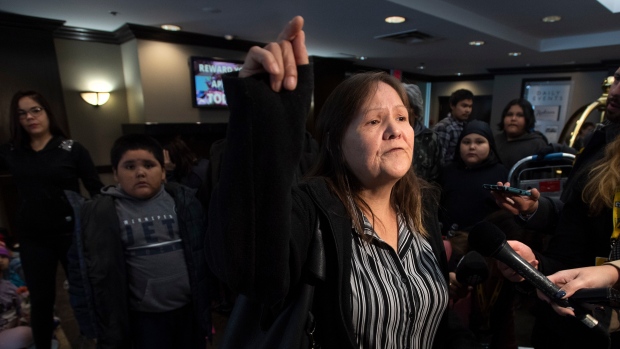 Surrounded by evacuees, Margaret Missyabit, an evacuated member of the Lake Manitoba First Nation speaks with the media at a hotel in Winnipeg, Monday October 14, 2019. THE CANADIAN PRESS/Adrian Wyld

WINNIPEG - Families forced to flee the Lake Manitoba First Nation are expressing frustration around evacuation efforts following a recent snowstorm that's left thousands of people in the province without electricity for days.

Babies and seniors alike were crowded into a Winnipeg hotel lobby on Monday waiting for buses in one what woman described as a maddening series of events that have left people feeling like animals.

They said they weren't sure where the buses would be taking them.

By coincidence, Conservative Leader Andrew Scheer's campaign arrived at the hotel and some of the evacuees asked for a chance to express their concerns to the media.

Margaret Missyabit's voice broke as she described walking out of her home on Saturday when the power went out to try and find out what was going on, saying the community was given little time to gather the things they needed before leaving.

Nearly 21,000 Manitoba homes and businesses remained without power early Monday in the wake of a snowstorm that the province's Crown energy utility said had left an unprecedented amount of damage to transmission lines, towers and more, and will take days to repair.

The Canadian Red Cross opened a warming shelter at the RBC Convention Centre in downtown Winnipeg over the weekend for the First Nations, which it said was necessary because of the potential number of evacuees as well as a lack of available hotel rooms.

The move makes it easier for Manitoba Hydro crews to access private land and invokes help from neighbouring provinces and states - Ontario, Saskatchewan and Minnesota - who were being asked for workers, poles and even transmission towers.

This report by The Canadian Press was first published on Oct. 14, 2019