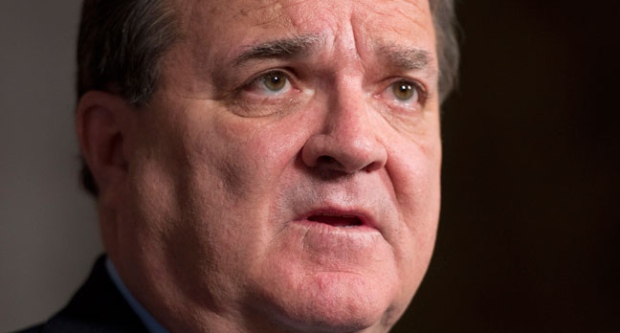 Minister of Finance Jim Flaherty speaks with the media in the foyer of the House of Commons, Friday, Dec. 14, 2012 in Ottawa. (The Canadian Press/Adrian Wyld)

OTTAWA -- Finance Minister Jim Flaherty is dismissing fears about Canada's housing market, saying the current slowdown is welcome news and that there is no need for further government intervention.

While some observers are expressing fears that a steep correction is underway that will bring down housing values and possibly affect bank credit ratings, Flaherty said Tuesday that he believes government mortgage tightening last July actually helped avert what could have turned into a housing bubble.

"I'm comfortable about where we are," he said in a telephone interview from France where he announced new government financing for the construction of a visitor's centre at the Vimy Ridge war memorial.

"I'm pleased in particular that the condo market in big cities has fallen back. I'm also pleased with some other moderation in new house construction and in demand for mortgages. I think these are healthy developments because I think we were beginning to see some indications of the beginning of a bubble."

He called the recent slowdown "healthy" and at least in part a consequence of his decision to tighten mortgage rules last July.

A new Teranet house price report released Tuesday showed home price increases slipped to two per cent in April from 2.6 per cent in March. Analysts noted that was the weakest performance since the recession for April, traditionally a good month for sales and prices.

While home sales have fallen nationally, and starts are now in the 180,000 a year range, well down from over 200,000 last year, home prices have stubbornly resisted that trend in most markets.

However, analysts note that prices are often the last indicator to kick in when a residential market falls, and some have speculated that prices could plunge by as much as 25 per cent, even further in the overheated Vancouver market.

The Office of Superintendent of Financial Institutions has told banks it is looking at their holdings of non-insured mortgages -- those with at least 20 per cent equity -- to determine the systemic risk should values plunge.

"I'm not going to intervene in the mortgage market, I don't need to," he said.

Over the weekend, Flaherty participated in a Group of Seven meeting in England, where he warned about waning resolve to reduce deficits and debt among southern European countries.

Flaherty said he had not changed his mind even though austerity is being blamed for depressing growth and in some cases exacerbating governmental deficits, since lower growth usually means lower tax revenues and higher costs.

Northern European countries agree with his position, he said, describing the U.S. stance on fiscal restraint as "ambiguous."

"If you don't get your fiscal situation correct in government, then you can forget about getting education, health-care, research and development and other important initiatives .... because you won't have the fiscal means to do it."

As well, governments risk not having the means to respond to the next economic crisis, he warned.

The minister said that governments can still stimulate economic activity while controlling spending.

"As I said to my G7 colleagues, it isn't an all or nothing game, it's about trying to get the right balance," he explained, pointing out that his March budget retained previously-introduced austerity measures while committing funds to infrastructure projects and job training.

From Canada's perspective, he says the government remains committed to balancing the budget in 2015.

"We're all agreed we have to make sure that large corporations that operate globally pay their fair share of tax and that they don't try to use one or the other of our jurisdictions not to pay their fair share. We are firmly resolved on that," he said.