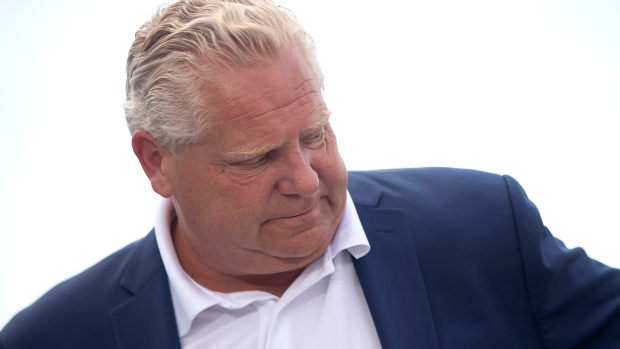 Ontario Premier Doug Ford is urging for the full extent of the law to be thrown people who attended a party in Brampton, Ont. this weekend.

Ontario’s premier has slammed more than 200 "reckless and careless" people who attended a massive party in Brampton, Ont., saying the full extent of the law needs to be thrown at these "yahoos."

Peel Regional Police say they were called to a home in the area of Countryside Drive and Goreway Road on Saturday night for a report that a house party was taking place inside, with parked cars all over the yard and the surrounding area.

Officials said the homeowner or party organizer hired security to park cars and also erected barriers above the home's backyard fence so people could not see inside.

Police said it took about an hour to disperse the party and send everyone home.

Peel is one of three Ontario regions held back from advancing to Stage 3 of the province’s reopening plan. Social gathering limits are still restricted to 10 people or less.

"I've never seen anything like it," Ford said Monday. "You would think the cheese slipped off the cracker with these people."

"You got health care workers working around the clock to protect us, you have the police protecting, emergency services, you have everyone in the province sitting there bending over backwards and you’ve got a bunch of jokers out there that think it's no problem."

"The full extent of the law needs to be thrown at these people, throw everything in the kitchen sink."

The homeowner has been charged under the Emergency and Civil Protection Act. If found guilty, the fines range anywhere from $750 to $100,000.

He noted that there were also other parties in Brampton on Saturday, and several homeowners were also charged under the act.

Elliott said these large gatherings are something that Ontario's top doctor will consider on Tuesday night when he makes the final call on whether the region can advance to Stage 3.

"This really does a disservice and I would say disrespect for the tremendous work that's being done by our frontline healthcare workers and all of the other emergency personnel," Elliott said.

Parties have been blamed for dozens of recent COVID-19 infections in the Ottawa area.

“I know these past few months have not been easy for any of us, everyone has had to make sacrifices, big and small, as we navigate our way through this unprecedented time,” she said.

“I know we all want to see our friends, get back to having large gatherings, but we cannot do that just yet. We are not out of the woods yet.”