Post-secondary students in Scarborough braved the winter elements Wednesday night to pitch questions to five of the candidates registered to run for mayor in the municipal election this fall.

Approximately 250 students were in attendance for the student-run mayoral debate at the University of Toronto Scarborough.

Speaking with CP24 at the event, Soknaki said he was surprised by the breadth of the questions asked by those in attendance.

“We heard everything from (questions about) Pride, to affordable housing, to bike lanes, to jobs, to transit,” he said.

“I thought it was excellent practice for us as candidates, but also a good sense of everything that is going to be top of mind for the electors and residents.”

The event was organized by the Scarborough Campus Students’ Union and was moderated by union vice-president, external, Guled Arale. 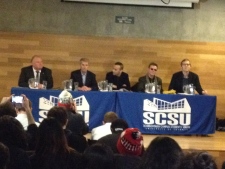 Toronto Mayor Rob Ford, left, and other candidates registered to run for mayor in the Toronto municipal election this fall take part in a student-run debate on Wednesday, Feb. 5., 2014. (CP24/Nneka Elliott)