Ford stands by estimate for early COVID-19 vaccine shipments, even as feds refuse to confirm number 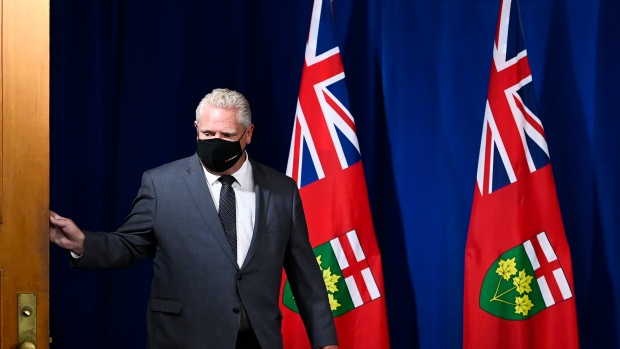 Ontario Premier Doug Ford arrives for a news conference at Queen's Park during the COVID-19 pandemic in Toronto on Monday, September 28, 2020. THE CANADIAN PRESS/Nathan Denette

Premier Doug Ford is standing behind information that his health minister provided about the number of COVID-19 vaccines that the province hopes to receive in early 2021, even as federal officials refuse to confirm the number.

Health Minister Christine Elliott said during Question Period on Wednesday that Ontario will receive 1.6 million doses of the Pfizer vaccine and 800,000 doses of the Moderna vaccine in the first three months of 2021, assuming both are ultimately approved for use by Health Canada.

Health Minister Patty Hajdu, however, refused to confirm the allotment while speaking with reporters in Ottawa later in the day.

Liberal MP and Parliamentary Secretary to the Minister of Health Darren Fisher also seemed to cast doubt on the veracity of the information during an interview with Evan Solomon on CTV’s Power Play in which he said he was “not aware” of where Elliott “got her numbers.”

Asked about the confusion during his daily COVID-19 briefing at Queen’s Park on Thursday, Ford said that he has since spoken with senior officials in the Ministry of Health and has been assured that they were provided the estimates by federal government officials.

He said that they were told “for planning purposes” that Ontario would receive 1.6 million doses of the Pfizer vaccine and 800,000 doses of the Moderna vaccine, as reported by Elliott.

Because both vaccines have to be administered twice, 21 days apart, the initial shipments would likely only be sufficient to vaccinate about 1.2 million Ontarians with priority likely being given to health care workers and long-term care home residents at first.

“I appreciate the feds that it is going to be trickling out because everyone wants it but really why shouldn't we get 40 per cent per like we always do,” Ford said. “There shouldn’t be any discrepancy whatsoever.”

Moderna, meanwhile, said last week that preliminary analysis from its Phase 3 trial has found their vaccine to be 94.5 per cent effective.

Prime Minister Justin Trudeau was pressed about the estimates provided by Elliott during a briefing in Ottawa on Thursday but also refused to confirm them.

He said that his government wants to ensure that as vaccines arrive they “get delivered as quickly as possible to vulnerable Canadians as a priority and then to all Canadians.”

But he said that right now the discussions with provinces are still “at a preliminary stage.”

“I think there are many numbers circulating amongst health officials as to what the possible deliveries of vaccines could be but we are not going to confirm those plans until we have much more certainty around them,” he said. “Yes vaccines are coming and yes Canada will be ready and will have the right plan to make sure we are getting those out to the country but right now it is too preliminary to make firm announcements.”