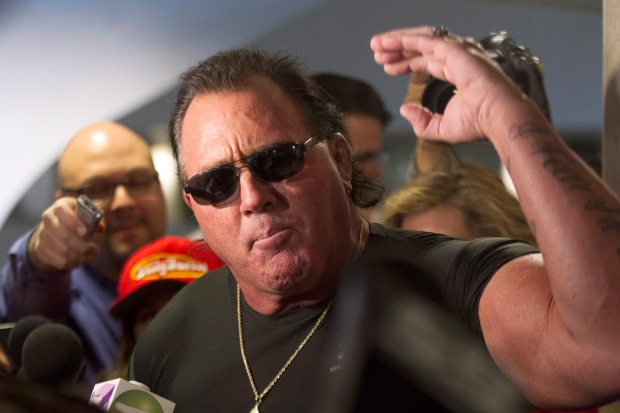 Brutus "The Barber" Beefcake speaks to the media outside Toronto Mayor Rob Ford's office on Thursday, Nov. 7, 2013, as he urged Ford to embrace healthier eating habits before he was kicked out after security objected to his prop shears. (The Canadian Press/Chris Young)

TORONTO -- As shocking new twists surfaced in the Rob Ford scandal, the drama unfolding outside the Toronto mayor's office has turned into a strange sideshow for those watching city hall.

The week that saw the leader of Canada's largest city admit he has smoked crack cocaine also brought a man in a giant banana suit and two professional wrestlers to his door.

Visitors lingering in the hallway twice burst into media scrums with their cries of support for the embattled mayor, who has so far refused to step aside.

And Ford himself -- in an unusual show of goodwill for the journalists he has so often criticized -- blew reporters a kiss as he gave students a tour of his office.

It began Monday, a day before the mayor admitted he has used the drug while in what he called one of his "drunken stupors."

While journalists waited for Ford to emerge, a man dressed in a bright yellow banana suit strolled into the mayor's office, pushing a cart full of fruit.

He later told reporters the delivery was meant to promote "health and wellness."

On Tuesday, curious onlookers began to gather around the horde of journalists waiting outside the mayor's office after the deputy mayor announced that Ford would "soon" make an announcement of his own.

In the approximately two hours that passed between that time and Ford's apology, the onlooker presence swelled to a crowd of dozens and they huddled behind the crush of media to hear Ford speak.

Murmurs of surprise reverberated through the crowd as he said he was staying on as mayor, then as he closed off his speech with "God bless the people of Toronto," those murmurs turned to outright laughter.

Ford laid low the next day, spending most of it behind closed doors. But when he caught sight of journalists watching him through the glass, he paused to grin and blow them a kiss before retreating once more.

One of the mayor's fans later came to his defence, interrupting a media scrum with a councillor with insistent shouts that Ford is being unfairly condemned, until he was removed by security.

That's when the mayor received a surprise visit from a former professional wrestler -- the second to confront Ford this year.

The Iron Sheik said he came to challenge the mayor to an arm-wrestling match, the same battle Ford won against wrestler Hulk Hogan this summer.

"If he can beat me, then he's a man," the wrestler said as the mayor, still in his office, appeared to mimic throwing a football.

Ford's emotional apology Thursday -- moments after the Toronto Star published a new video showing him in a profanity-laced rant -- was briefly derailed when someone screamed "Rob Ford for prime minister!"

Brutus "The Barber" Beefcake said he wished to urge Ford to embrace healthier eating habits but was kicked out after security objected to his prop shears.

The wrestler called himself Ford's "angel of mercy" and said the mayor needs "an intervention" and should get help.

With files from Allison Jones.