Most want Ford to resign or take a break, poll says

Only a quarter of Torontonians believe Mayor Rob Ford should remain in office as he faces calls to resign or step aside after admitting to smoking crack cocaine, a new poll suggests.

The Ipsos Reid poll was conducted exclusively for CP24, CTV News and Newstalk 1010 amid the defiant mayor’s crack cocaine scandal.

While one quarter of respondents (24 per cent) believe Ford is fit to continue as mayor, most believe he should resign or take a leave of absence to deal with his personal issues.

Of those polled, 41 per cent said Ford should resign permanently and stay out of politics, while 35 per cent said the mayor should take a break for treatment, come back in a few months and run in the October 2014 municipal election.

Ford has ignored repeated calls to resign or step aside, saying he plans to remain in office and seek re-election next year.

As he made his way to Wednesday's city council meeting, Ford dismissed the poll's findings.

"I don’t comment on polls. The only poll that matters is on October 27th," said Ford, looking ahead to the next municipal election.

Over a period of two years, Ford’s approval rating has been on a downward spiral, according to polls conducted by Ipsos Reid.

In September 2011, the mayor had an approval rating of 62 per cent less than a year into his current four-year term.

That number dipped to 49 per cent in June 2012 and is now down to 40 per cent - a drop of 22 percentage points over two years - with the next election a year away, according to the poll released Wednesday morning.

It comes as no surprise that Ford’s approval rating is higher in the suburbs than it is in Toronto’s core.

He finds his strongest support in Scarborough (49 per cent), his home territory of Etobicoke (45 per cent) and North York (43 per cent), Ipsos Reid says.

His support is lower in York/East York (32 per cent) and old Toronto/downtown (29 per cent).

Ford’s scandal has received attention around the world and provided laughs for late-night comedians, and it appears many people are growing tired of the coverage.

Nearly half of Torontonians (46 per cent) agree that the media should back off and give Ford time to show that he has changed his ways, Ipsos Reid says.

Fifty-four per cent don’t think the media should let up on Ford.

Here are some additional highlights from the poll:

Ipsos Reid conducted the poll between Friday and Tuesday, surveying 665 Torontonians via an online panel. The poll is accurate to within 4.3 percentage points. 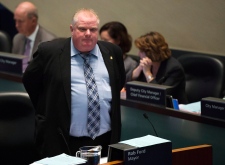