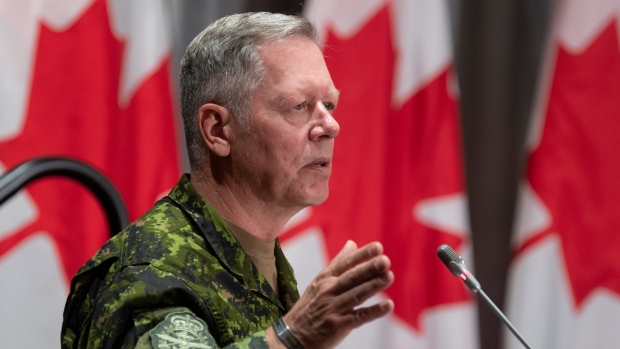 Then-Chief of Defence Staff Jonathan Vance responds to a question during a news conference Friday, June 26, 2020 in Ottawa. THE CANADIAN PRESS/Adrian Wyld

OTTAWA - Retired general Jonathan Vance, former chief of the defence staff, has been charged with obstruction of justice related to an investigation into allegations of sexual misconduct.

The Canadian Forces National Investigation Service said Thursday the criminal charge will be pursued in civilian court, given the details of the case and the limits of the military justice system.

A recent report by retired Supreme Court justice Morris Fish recommended overhauling the military justice system, which works in parallel with the civilian system and applies only to Canadian Armed Forces members.

Global News first reported allegations in February that Vance had a relationship with a subordinate that began in 2001 and continued after he accepted the top job in 2015.

Vance has also been accused of sending a lewd email to a junior member in 2012.

The former top commander, who stepped down in January, has declined requests for comment from The Canadian Press, but Global has reported he denies any wrongdoing.

Prime Minister Justin Trudeau declined to comment on the charge Thursday, telling reporters: “As obviously this is a matter for the courts, I'm not going to be reacting right now.”

The announcement from the specialized military police unit comes more than five months after the Armed Forces were rocked by allegations of inappropriate sexual behaviour by the military's most senior commanders, including Vance and his successor, Admiral Art McDonald.

The Liberal government announced in April it was tapping former Supreme Court justice Louise Arbour to lead a review of sexual harassment and assault in the military and provide recommendations on an external reporting system for victims.

The Arbour report is expected to come out in about nine to 12 months.

Lt.-Gen. Jennie Carignan, one of the military's highest-ranking female officers, has been promoted to lead a new internal organization that will oversee professional conduct and culture and follow up on any allegations.

Opposition leaders have said the Trudeau government largely failed to act on a 2015 report by former justice Marie Deschamps that also called for an independent reporting process and a reformed military culture, and that action rather than another review is what's needed.

In June, the House of Commons defence committee ended months of hearings on the government's handling of the allegations against Vance and McDonald without producing a report after Liberal members continued what opposition parties have said amounts to filibustering.

The chances of the committee now producing a report appear slim, as an election is likely.

Questions have also emerged about what Defence Minister Harjit Sajjan and the Prime Minister's Office knew of the allegations against Vance, with Trudeau stating he was never informed of the specific accusations.