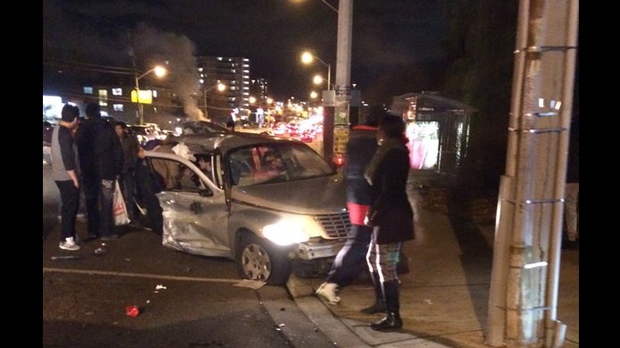 Passersby observe a damaged vehicle after a collision on Jane Street on Nov. 14. (Twitter/Enza Carrera)

Two people were seriously hurt and another two suffered minor injuries after a two vehicle crash that led to one car catching fire in North York’s Downsview neighbourhood Saturday night.

Toronto police and paramedics were called to the area of Chalkfarm Drive and Jane Street before 7 p.m. Saturday, to find two vehicles severely damaged, one of them with a fire emanating from its engine bay.

Jane Street was closed between Wilson Avenue and Chalkfarm Drive to allow for cleanup and an investigation.