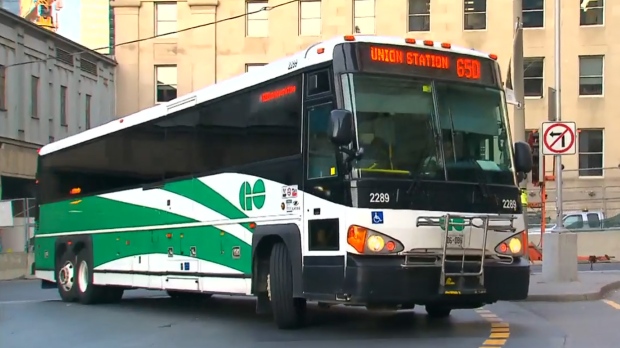 A GO bus operator was arrested for impaired driving at the Square One depot in Mississauga on Friday night after a supervisor became concerned by his behavior and notified police.

he became “very concerned” that the driver may have been intoxicated and decided to contact police.

Officers then arrived on scene and transported the driver to a police station, where he was given a blood test. He was then charged with driving with a blood alcohol concentration in excess of 80 milligrams.

Metrolinx says the driver has been relieved of his duties pending an internal review.

“I won’t try to hide the fact that we were shocked, we were very, very disappointed that this would happen and we were very concerned,” Aikins told CP24 on Saturday afternoon.

Aikins said that the driver, a 37-year-old Toronto man, was finishing his shift when the supervisor took note of his behavior.

She said it’s too early to say whether he had been drinking on the job or had consumed alcohol before his shift but promised to “get to the bottom of what actually happened.”

“This something that we take very seriously. It is not something we have any tolerance for whatsoever,” she said. “We are looking not only into this driver’s behavior in the past – he has been with us for nine years - but we will also look for any incidents throughout the day and whether there have been previous incidents with him.”

Aikins said that this is the first time that a GO Transit operator has been charged with impaired driving.

The driver is expected to appear in court on April 25.