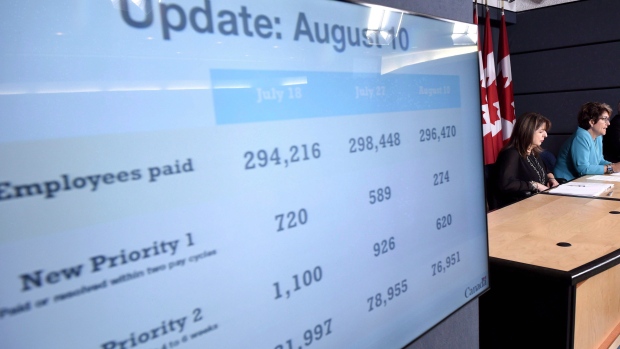 Deputy Minister of Public Works and Government Services Marie Lemay (right) and and associate assistant deputy minister Rosanna Di Paola speak to reporters during a technical briefing on the Phoenix pay system in Ottawa on Aug. 11, 2016. (THE CANADIAN PRESS/Justin Tang)

OTTAWA - The federal government says the recent hiring of new staff at its pay centre in Miramichi, N.B., has helped cut the backlog of problem files created under the troubled Phoenix pay system.

Public Services and Procurement Canada says the backlog of transactions involving overpayments or underpayments of civil servants was cut by 25,000 in May, compared with the previous month.

The department said roughly 347,000 transactions beyond its normal workload were still waiting in the queue as of May 30, down from the 372,000 recorded in April.

The number marked the fourth monthly decline in problem pay files since the backlog peaked in January.

It's not clear whether those projects, including the use of so-called pay pods, contributed to the improving backlog.