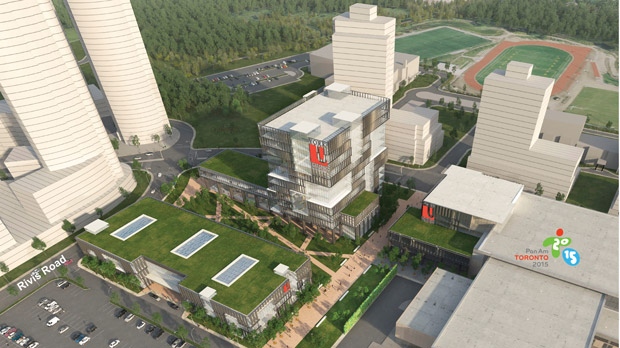 York University will build a new joint campus in the heart of Markham, after the Ontario Government gave the project the go-ahead Wednesday.

The new campus, to be situated near Unionville GO station, just north of the intersection of Highway 407 and Kennedy Road, will be the home to at least 4,000 students in eight different fields of study.

Students will be able to take courses in fields such as arts and media, IT, liberal arts, education, environmental studies and business. Certain programs will be offered in conjunction with Seneca College.

The City of Markham donated the land the campus will be built upon, while York University has committed $45 million for its construction. York Region has committed up to $25 million.

Ministry of Colleges, Training and Universities spokesperson said the amount of funding the province will provide "will be finalized following a full review of procurement options and estimated costs."

Officials say the number of residents aged 18-21 in York Region will grow by 175,000 between now and 2036, making the area ripe for a new post-secondary campus.

A construction start date has not yet been set.

The proposal from Seneca and York University beat out several other competing proposals submitted to the province for the construction of new university and college campuses.

Wilfrid Laurier University officials said they were “disappointed” with the Ministry of Colleges, Training and University’s decision, but will continue to pursue a plan to build a 150 acre campus in Milton.