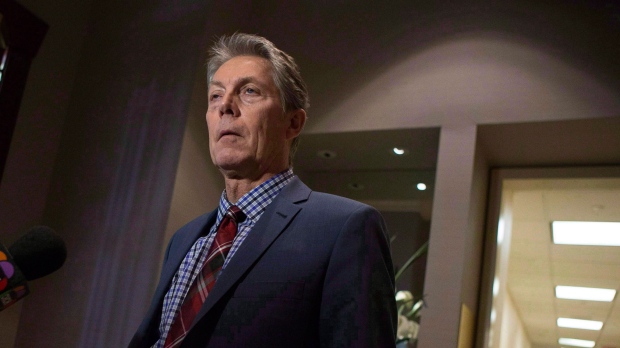 Hamilton Mayor Fred Eisenberger is interviewed by a television station as he attends the Big Cities summit hosted by the Federation of Canadian Municipalities in Toronto on Thursday, February 5, 2015 . THE CANADIAN PRESS/Chris Young

A union representing public transit workers in Hamilton is vowing to fight a decision by city council to move ahead with terminating unvaccinated employees as soon as next month.

But during a meeting on Wednesday council voted to keep the policy in place for the time being.

The decision paves the way for hundreds of non-compliant workers to be terminated after May 31, unless they provide proof that they have been fully vaccinated.

“It is irresponsible for this city council to cast a vote to terminate hard working employees, who have served on the front lines for the last two years during COVID-19, especially during times without any protection,” Amalgamated Transit Union Local 107, which represents Hamilton Street Railway employees, said in a statement issued on Thursday. “To come to this conclusion now is disrespectful and completely unfair to all frontline city and transit workers who continue to work and serve this community daily.”

The City of Hamilton has said that about 94 per cent of its employees are fully vaccinated and in compliance with the policy.

However, that still leaves approximately 500 people who could now face termination.

Previously, those employees were allowed to continue reporting to work so long as they participated in a regular rapid testing program.

In its statement, ATU Local 107 said that it will push ahead with a grievance over the policy, particularly in light of a recommendations from Hamilton’s own medical officer of health to suspend it.

It warned that the decision could ultimately cost taxpayers “$500,000 for unnecessary litigation.”

“Those financial resources could have been better spent on upgrading air treatment equipment on our buses to better protect both workers and transit riders,” the union said.

Hamilton has had a vaccination policy for employees since August, 2021. It amended the policy in January to allow for the termination of non compliant workers as of May 31.

Several other municipalities also have mandatory vaccination policies that remain in place for employees, including Toronto.

“Throughout the pandemic, the City of Hamilton has been steadfastly committed to supporting the health and safety of the broader community and providing a safe working environment for our employees, volunteers and students. Ensuring high rates of vaccination remains one of the most important ways we can protect our community,” Hamilton Mayor Fred Eisenberger said in a statement issued on Wednesday, following the council vote.