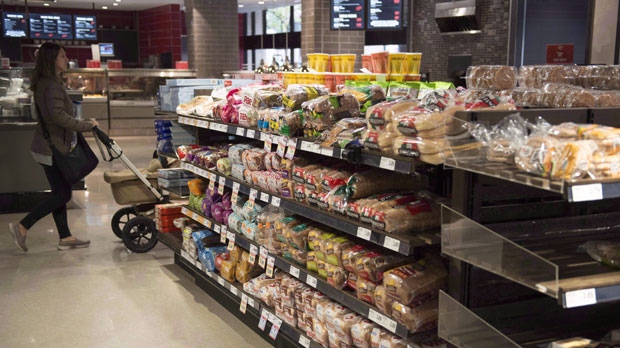 Uber is hiring a head of grocery product in Toronto, a sign that the company may be eyeing moves to disrupt the supermarket industry. The bread section is seen in a grocery store in Toronto on Wednesday, Nov. 1, 2017. THE CANADIAN PRESS/Doug Ives

TORONTO -- Uber is hiring a head of grocery product in Toronto, a sign that the company may be eyeing moves to disrupt the supermarket industry.

The U.S.-based technology giant says in a LinkedIn job posting that the role will help the company define and build "a brand new product offering, which will fundamentally evolve how people purchase their groceries."

The posting says the successful candidate will work with a newly-formed team based in Toronto.

Uber has used the city as its test bed for food-related innovation before, launching Uber Eats there in 2015.

Its chief executive officer Dara Khosrowshahi has also hinted recently that delivering food to someone in their home in 30 minutes or less is "magical" and he sees grocery as being an "adjacency."

Uber Canada confirmed to The Canadian Press that it is seeking a head of grocery, but offered no hint about what its plans for the role are.

In a statement to The Canadian Press, the company would only say, "Our Eats team is always looking to expand into new areas where our technology can help people get food more easily and efficiently."