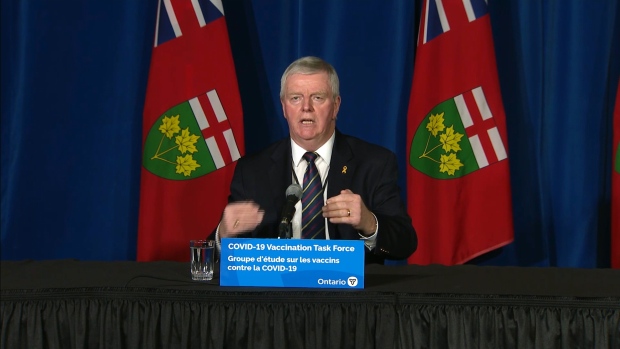 The chair of Ontario’s vaccine task force is reiterating his belief that every person in the province will have the chance to receive a shot by the first day of summer as he wraps up his four months on the job.

Retired general Rick Hiller was appointed as chair of Ontario’s vaccine task force back in November, weeks prior to the approval of the Pfizer and Moderna vaccines by Health Canada.

Hillier’s early days on the job were mired by numerous challenges as delivery delays slowed the pace of vaccinations in Ontario and forced the City of Toronto to shutter a trial mass vaccination clinic after just two days.

But in recent weeks the pace of vaccinations in Ontario have picked up and Hillier leaves with Ontario having administered nearly 2.1 million doses of COVID-19 vaccine and sitting on the cusp of expanding vaccine availability to a number of other priority groups, including frontline workers and people with pre-existing conditions.

“As we stand here today we are literally weeks in front of where we thought we would be back in December and January as we were building the plan,” Hillier said during a press conference alongside Premier Doug Ford on Tuesday afternoon. “We thought it would be early April until we got into 80 years old and above and here we are now vaccinating those who are 75 years old, 70 years old and very soon we will drop down to even lower age brackets and get the mass of the population as much protection as that one needle can bring to them.”

Hillier told reporters that the province now has an “enormous” capacity to administer vaccines, which includes 700 pharmacies and dozens of mass vaccination clinics.

He said that he remains confident that most Ontarians will receive at least one shot by June 20 but acknowledged that reaching that goal will largely depend on the availability of vaccines.

“I told the premier I am a call away if he needs anything more but I don’t believe he will. We have the leadership in place, they will deliver on the vaccination rollout from here on in and I still believe that by the first day of summer given the delivery of the vaccines we will have a needle in the arm of every eligible person in Ontario who wants one,” he said.

Hillier’s final day on the job is tomorrow. He leaves the role with the number of COVID-19 cases on the upswing once again and COVID-19 hospitalizations approaching the peak that was seen during the second wave of the pandemic in January.