TORONTO - Jacob Hoggard will likely face more than two years in prison, an Ontario judge said Sunday after the Hedley frontman was found guilty of raping an Ottawa woman but not guilty of groping and raping a teenage fan.

Hoggard, 37, hugged his wife in a Toronto courtroom after jurors delivered their verdict in the early evening. His wife wiped away tears after Hoggard returned to his seat.

The verdict capped off six days of deliberations that saw the jury -- which appeared to be composed of 10 men and two women -- twice declare itself deadlocked on “some counts” before pushing forward. Jurors also asked several questions on legal issues, many related to consent.

Crown attorney Jill Witkin described Hoggard's crime as “brazen, brutal, degrading, traumatic” as she asked the court to revoke his bail until his sentencing. 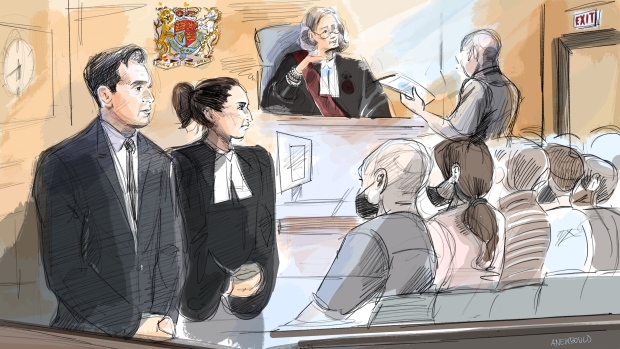 A hearing on bail is scheduled for Monday morning, with a sentencing hearing expected this summer.

Hoggard had pleaded not guilty to two counts of sexual assault causing bodily harm and one of sexual interference, a charge that refers to the sexual touching of someone under 16.

During trial, prosecutors alleged Hoggard groped the teen after a Hedley show in Toronto in April 2016, then violently raped her in a Toronto-area hotel room later that year after she turned 16. They alleged he then violently raped the Ottawa woman in a downtown Toronto hotel in November 2016.

Both complainants testified they were left bleeding and bruised. They each said Hoggard slapped them, spit in their mouths and called them derogatory names such as “slut” and “whore” during the encounters, and that he restricted their breathing at one point.

The younger complainant said Hoggard pushed her face into the pillows until she thought she would pass out, while the Ottawa woman said he choked her so hard she feared she would die. The second complainant also said that on one occasion, Hoggard dragged her by the legs into the bathroom and asked her to urinate on him, then said he would urinate on her, both of which she refused.

The Crown urged jurors to consider the similarities between the events recalled by two women who have never met or spoken to each other, arguing they reflect a pattern of conduct.

Hoggard, meanwhile, testified during trial that he had consensual, “passionate” sex with the complainants, and he didn't touch the teen sexually until after she turned 16.

“I knew when she turned 16,” Hoggard testified, adding he made sure “to be responsible and not break the law. ”

He denied choking or restricting the complainants' breathing but said some of the other things they described - including slapping, spitting, name-calling and urination - were among his sexual preferences and therefore could have happened. He described the type of slapping he enjoys as more of a gentle tapping.

He testified that his memory of the encounters wasn't clear, but he knew the complainants consented based on their verbal and non-verbal cues, and because it was his practice to pay attention to his sexual partners.

Defence lawyers alleged the women lied about being raped after Hoggard rejected them because they were embarrassed and upset that he had used them for sex.

Since Hoggard acknowledged having sex with both complainants, the case turned on the issue of consent, with jurors left to determine whether the encounters were violent rapes, as the complainants alleged, or consensual one-night stands, as the singer maintained.

Jurors spent much of the weekend replaying the bulk of the testimony given by the complainants and Hoggard regarding the hotel encounters.

They were told that if they found the complainants didn't consent, they should have “little difficulty” concluding Hoggard knew or willfully ignored the fact they were not consenting.

Over the course of the roughly month-long trial, jurors heard dramatically different portrayals of Hoggard, a musician whose band, Hedley, rose to fame after he came in third on the reality show Canadian Idol in 2004.

Hoggard's lawyers described him as an insecure, flawed man who sought validation from women through frequent one-night stands while touring, even while in a relationship. He had amassed a roster of women in various cities and would get in touch with them when he was in town, at times arranging transportation to bring them to his hotel, they said.

The singer may have been cavalier to women and inconsiderate of their feelings, but he is not a “sadistic serial rapist,” defence lawyer Megan Savard said in her closing arguments to the jury. 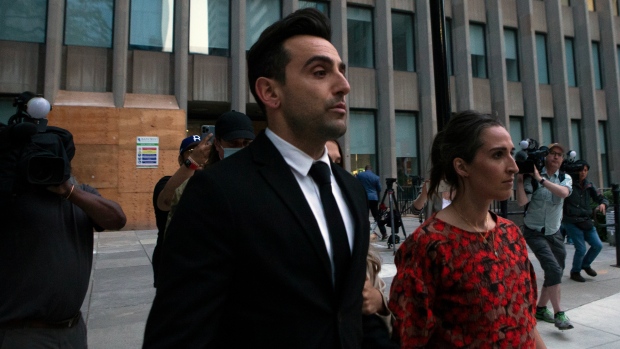 The Crown, for its part, painted Hoggard as an “entitled sexual opportunist” who didn't think he had to take no for an answer when it came to satisfying his “unusual” sexual desires.

Witkin argued in her final submissions that the singer couldn't specify what sounds or gestures the complainants made to signal consent, particularly for acts such as slapping or spitting.

Court heard the younger complainant had been a Hedley fan since childhood and first met the singer after a concert when she was 12. Her parents exchanged numbers with Hoggard, and the teen began communicating with him directly in April 2016 when she was 15.

Later that month, Hoggard arranged to have her and two friends come to a Hedley show in Toronto, court heard. He sent a car to her hometown north of the city and gave the three teens backstage passes, jurors heard.

The complainant testified that after the show, they met Hoggard backstage and he repeatedly tried to touch her buttocks while taking photos together. She also said he tried to kiss her neck at one point. Hoggard testified that did not happen, and that the complainant was the one who jumped in his arms.

At some point over the next few months, the pair began exchanging nude photos, court heard.

The complainant testified Hoggard told her he loved her, that he saw a future with her and wanted her to bear his children. The singer testified he lied because he enjoyed the validation and wanted to have sex with the complainant once she turned 16.

The complainant said the two of them eventually made plans to meet in Toronto in September. She testified she did not plan or want to have sex that day and thought that while Hoggard might try to kiss her, he would respect her boundaries if she said no.

Court heard Hoggard sent a car to pick her up and take her to his hotel near Pearson International Airport on Sept. 30. The defence argued the complainant knew where she was going.

Once there, the complainant said Hoggard aggressively kissed her, then pushed her on the bed, took her clothes off, performed oral sex on her and then repeatedly raped her vaginally and orally. She said he also attempted to do so anally but was unsuccessful.

The complainant said she texted a friend while Hoggard was in the shower, asking that friend to call and pretend to be her work so she would have an excuse to leave early. She testified Hoggard then called the driver and escorted her down, saying he'd had a great time and couldn't wait to see her again.

Phone records presented in court show the complainant called her friend at 1:26 p.m. that day, and the driver's log indicated they left the hotel around 1 p.m.

The defence suggested the complainant did not pretend to be called in to work but was instead asked to leave by Hoggard, which hurt her feelings. Prosecutors argued the complainant may not remember the exact timeline but she was adamant that she contacted her friend in an effort to leave the hotel.

Court heard the second complainant came across Hoggard on the dating app Tinder in early November. She eventually agreed to travel to Toronto later that month to have sex with him, the woman testified.

Once they arrived in a room, the woman testified he immediately pushed her against the wall and forced a kiss on her, and when she pushed him off, he told her she could leave.

She said she found him rude but thought things would eventually be fine adding she didn't consider leaving because she had nowhere else to go until her train ride back to Ottawa.

Later, however, she testified Hoggard pushed her on the bed, took off her clothes and repeatedly raped her anally, orally and vaginally.

Eventually he told her he had to go and the complainant took a taxi to a Tim Hortons to wait for her train, she said. Hoggard told her they'd had a good time and he looked forward to seeing her again, she said.

Hoggard testified he didn't actually have to go, simply wanted to get on with his day and had no intention of seeing her again.

At some point, the complainant texted Hoggard. She said she told him he had raped her; Hoggard contended she told him she was unhappy with their encounter.

They spoke on the phone in the days that followed. Hoggard testified he recorded the call to protect himself.

In the call, which was played in court, Hoggard spoke in a soothing tone and told the complainant he was shocked by her text, he had been attentive and they'd had a good time.

The complainant, sounding hoarse, told him they had different opinions and repeatedly accused him of speaking from a script.

She told Hoggard she needed to get stitches in her vagina and she was planning to speak to a lawyer, claims she acknowledged on the stand weren't true. She told the court she lied on the call to get a reaction - and, she hoped, an apology - from him.

The defence argued that though both complainants said they had genital bleeding and bruises after the encounters, no injuries were noted on their medical records.

Both complainants reported their allegations to police in early 2018 and Hoggard was charged that summer.

The musician has recently been charged with sexual assault causing bodily harm against a third complainant in an incident alleged to have taken place in Kirkland Lake, Ont., on June 25, 2016. Hedley played the Kirkland Lake Homecoming festival on June 24 of that year.

The new charge could not be reported on until jurors in the Toronto trial began their deliberations to avoid the risk of tainting the jury.

This report by The Canadian Press was first published June 5, 2022.

Are you a survivor of sexual assault seeking support? The Canadian Women’s Foundation has a list of National and provincial resources for those in need of help that can be found here.