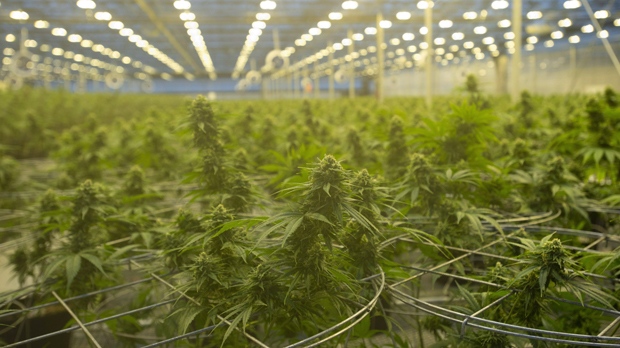 Cannabis plants are seen during a tour of a Hexo Corp. production facility, Thursday, October 11, 2018 in Masson Angers, Que. THE CANADIAN PRESS/Adrian Wyld

The announcement by Truss Beverage Co. comes one week after its competitor Fluent Beverage Co. - a joint venture between the world's largest brewer Anheuser-Busch InBev and B.C. pot company Tilray Inc. - said it was launching CBD drinks as early as December, but it was not yet able to develop a formulation for THC.

Truss chief executive Brett Vye said it has developed a beverage containing tetrahydrocannabinol (THC), the compound in cannabis that produces a high, and it aims to launch various drinks containing the active ingredient by December.

He noted that the cannabis beverages joint venture was launched roughly one year ago, and innovation teams had already been working on development for four months prior to that.

“We've been at this for quite a while now, and we feel very confident and very excited about the THC products we will be launching,” Vye said in an interview.

Truss plans to launch six pot beverage brands by December, starting with a flavoured spring water infused with cannabidiol, a non-intoxicating compound found in pot also known as CBD. The water will be called Flow Glow, in partnership with Canadian company Flow Alkaline Spring Water, and produced at a facility in Belleville, Ont.

The launch comes as Canada both marks the first year of recreational cannabis legalization on Thursday, and new rules governing next-generation pot products such as beverages, edibles, topicals and vapes come into force.

Due to the mandatory 60-day notice period companies must provide to Health Canada before selling these products, the earliest CBD beverages and other Cannabis 2.0 goods can legally go on sale in Canada is mid-December. However, when products hit retail shelves will also depend on provincial or territorial entities that govern the distribution or sale of cannabis as well.

A recent report by Deloitte estimated that the Canadian market for next-generation pot products was worth an estimated $2.7 billion annually. Roughly $1.6 billion will be spent on edibles, followed by cannabis-infused beverages at $529 million and topicals at $174 million, it said.

In the lead up to this next wave of pot legalization, there have been several tie-ups between alcohol conglomerates and Canadian cannabis companies.

In addition to Truss and Fluent, Corona beer maker Constellation Brands in 2017 acquired 10 per cent of Canadian cannabis company Canopy Growth Corp. for $245 million in a deal that included collaboration on cannabis-based drinks. Constellation later upped its investment by $5 billion, making it Canopy's largest shareholder.

Fluent's chief executive Jorn Socquet last week did not offer many specifics about its CBD beverage lineup, but said it did not have a beer-like product planned because research showed that consumers were not interested. It would instead focus on “sparkling, slightly sweet beverages” and teas, he said.

Vye said Truss had spent a lot of time reviewing cannabis drink brands in U.S. states where cannabis is legal, and found that many were “not great tasting.” However, the feedback Truss has received on its pot beverages has been positive.

The company's first product is a spring water aimed at the growing wellness category, as it looks to tap a broader consumer base than just existing cannabis users, he added.

“We think that almost 65 per cent of our consumers will be new to the cannabis category,” he said.

He estimated that cannabis-infused drinks would eventually comprise between 10 and 20 per cent of the overall market for pot in Canada.

Vye would not provide much detail on its other five brands ahead of the official launches, but said that its offerings will cater to “all the drinking occasions.”

He would not confirm whether that would include a beer-like product, but said the company believes there is an opportunity for it.

“When we launch and go out to market, that will be our true market research,” he said. “That's where we'll truly understand the interactions with consumers and whether or not, for example, beer, is a relevant format for this category.”