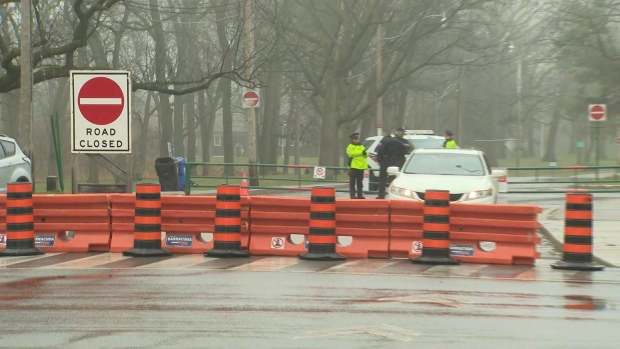 Police are shown at one of the entrances to High Park on Thursday morning. The city has closed the park for the duration of the cherry blossom season.

One of Toronto’s most popular parks is officially off limits to the public as the city takes rather drastic action to reduce the spread of COVID-19 during the annual cherry blossom season.

The city has closed off all entrances to High Park effective today as it seeks to discourage people from visiting the popular west-end attraction in large numbers to see its dozens of cherry blossom trees in bloom.

Instead, it is encouraging residents to get their cherry blossoms by viewing a live stream that the city has set up on its website.

Anyone who does enter the closed park could face a fine of $750.

“There is no wish on my part anybody else’s part to have a big crackdown,” Mayor John Tory told CP24 on Thursday morning. “I would like to think that people will know by now that the more they follow along with these rules and frankly stay home if they possibly can the faster the day will come when everything will be open. High Park will be open, the stores will be open, the bars, the restaurants. That will be the result if we follow the rules.”

Tory told CP24 that he made the decision to close High Park with “great regret” given how heavily used it is by the community but he said that he felt it was necessary to stop “huge crowds” that could spread COVID-19.

On Thursday morning, police officers were seen posted at each entrance to the 399 acre park as a reminder to the public of its closures.

Large electronic signs had also been brought in to warn would-be park goers to not proceed any further.

“We don’t have fresh air anymore around High Park,” frustrated resident Deborah Hammond told CP24. “Most of us who live here in the community we need to walk our dogs, bike, walk, run. This park is huge; we are talking about one-fourth or one-fifth that has cherry blossoms. They don’t take the whole park. It is very frustrating,”

The city has said that the blooming of the cherry blossom trees can last anywhere between four and ten days.

High Park will be reopened to the public after that point.