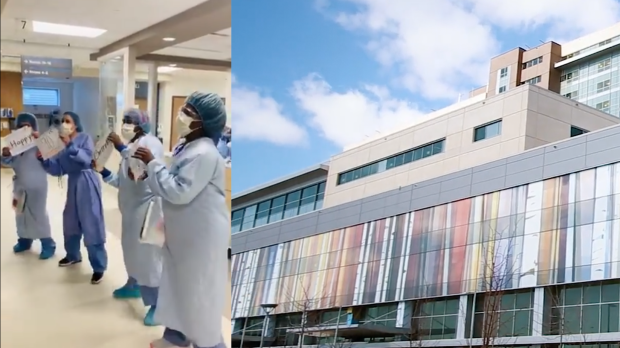 Staff at Humber River Hospital found a special way to mark a major milestone for Rayla Wasserman, who couldn’t see her family on her 90th birthday.

Wasserman, who was admitted to the North York hospital earlier this week for an illness unrelated to COVID-19, had initially wanted to spend her birthday with her kids and grandchildren but party plans were derailed when physical distancing measures were put in place to slow the spread of the virus.

But when her birthday rolled around on Tuesday, it did not go unnoticed by hospital staff.

Standing a safe distance away from Wasserman’s bed and decked out in personal protective gear, nurses held up signs and sang to the 90-year-old on her special day.

The act of kindness was captured on video by staff at the hospital and was sent to Wasserman’s family, who subsequently posted it on social media.

“It sucks to celebrate your birthday in the hospital, but she was so happy that the nurses took the time out of their day to do it,” Wasserman’s granddaughter Lindsey told CP24.com on Friday.

Lindsey Wasserman said staff also helped her grandmother watch a video from her family wishing her a happy birthday.

“Even though they are over-worked, they decided to do this for my grandma so we are so happy,” she added.

“These nurses that put the thought into this really deserve to be recognized.”

She said her grandmother was released from the hospital on Thursday and is doing well.

“We are so happy to have her home.”